His condition was being monitored, and he could be shifted to the RML's nursing home, the doctor said. 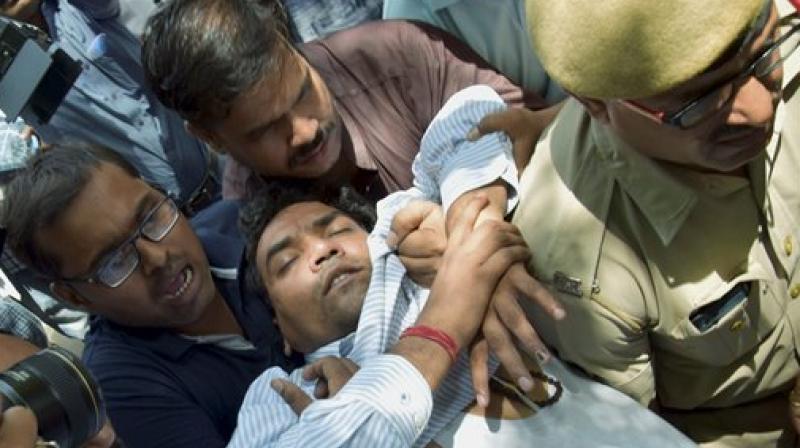 Kapil Mishra fainted after his press conference on revelations on AAP’s finances, being taken to the Ram Manohar Lohia Hospital, in New Delhi on Sunday. (Photo: PTI)

New Delhi: The condition of rebel Aam Aadmi Party (AAP) leader Kapil Mishra, admitted to the RML hospital here after he fainted while addressing the media on Sunday, is stable, doctors said.

The former water resources and tourism minister in the Delhi government is suffering from "a little weakness and mild dehydration", an RML doctor said.

"But he is conscious and his vitals are all normal," the doctor said. His condition was being monitored, and he could be shifted to the RML's nursing home, the doctor added.
Mishra, who has been on a hunger strike for five days, fainted at around noon in the midst of a press conference.

Late last night, a team of doctors from RML hospital had examined Mishra and said his blood sugar level, pulse rate and blood pressure were normal. The doctors had also advised that he be hospitalised, but Mishra carried on with his hunger strike.

The doctors said that the mild dehydration suffered by Mishra was because of no salt intake for the last few days, and described the condition as "starvation ketosis".

Mishra started his hunger strike on May 10, with the demand that his party release details of foreign tours undertaken by five leaders.

He has also levelled allegations of corruption against several party leaders, including the Chief Minister Arvind Kejriwal and PWD Minister Satyendar Jain.