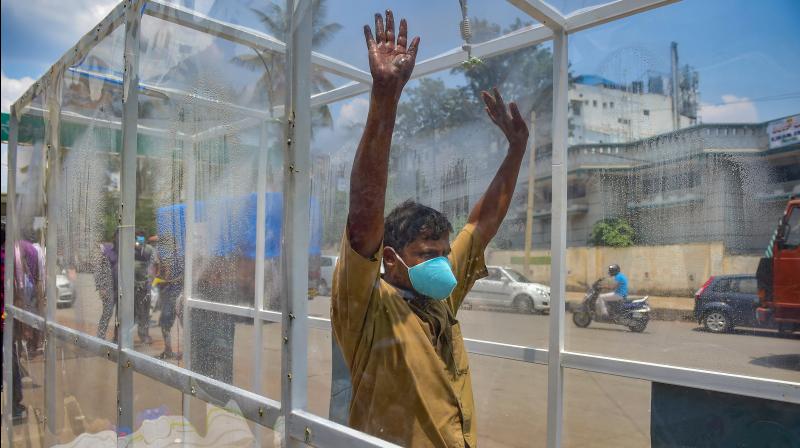 A worker passes through a disinfectant tunnel at the entrance of APMC market during the nationwide lockdown to curb the spread of coronavirus, in Bengaluru. PTI Photo

Hyderabad: Disinfectant tunnels are the new rage in the age of Covid-19. Tunnels which spray a fine mist of sodium hypochlorite solution on those passing through them have been set up with great enthusiasm in several locations across the state over past few days.

These disinfecting tunnels, or chambers, have become very popular across the country in the past few weeks, with one of them installed even at the All India Institute of Medical Sciences in New Delhi.

But these will do more harm than good, the state health department has warned. The department, in a circular on Sunday, said the chemical spray is not safe for human health, even in very small volumes.

“People can develop skin irritation, can have their soft tissues in their respiratory tracts affected by the chemical. Our advice is that no one should use these tunnels,” a health department official told Deccan Chronicle on Monday.

Sodium hypochlorite, when dissolved in water, forms hypochlorous acid. The chemical in powder form and in liquid form is popularly referred to as bleaching powder or liquid bleach and is a powerful oxidizing agent.

“No one every checked with the health department on the utility or safety of these tunnels. With several people and offices wanting to set them up, it was time to put an end to these tunnels, which are unsafe,” the official said.

“The facilities were possibly set-up with good intentions but without really going into the utility and safety aspects,” the official said.

Incidentally, one such tunnel was inaugurated with great fanfare at office of the Director-general of police (DGP) in Hyderabad. Similar tunnels were installed and inaugurated at Rachakonda Police Commissionerate, at the Balasamduram vegetable market in Warangal, and even at the Rajiv Gandhi Institute of Medical Sciences in Adilabad.

The Telangana police also set up a mobile disinfectant vehicle for use by policemen on duty at various check posts here in the city.

The World Health Organization says that such attempts to sanitise or disinfect people using Sodium Hypochlorite can be unhealthy and actually do little to kill Coronavirus or other viruses. The chemical works only on inanimate surfaces and can cause serious irritations and reactions among people exposed to the chemical, the WHO said, in one of its myth-buster posts on its website.

Among those who have developed such tunnels in India are the Defence Research Development Organization (DRDO), Indian Railways and a slew of private entrepreneurs. Depending on the manufacturer, costs range between Rs 10,000 to Rs 1.5 lakh for each of such units.