The mission covers 10 Cr poor families and provide a cover of Rs 5 L per family per year for secondary, tertiary care hospitalisation. 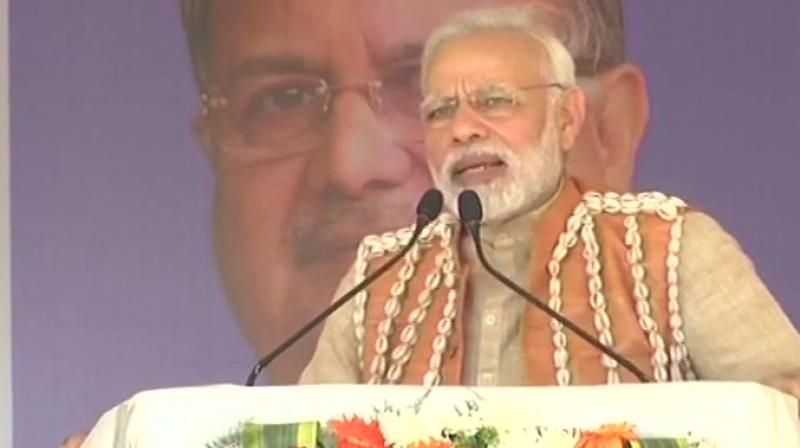 The Prime Minister's visit to the state coincides with the birth anniversary of Dalit icon BR Ambedkar. (Photo: DC)

The mission aims at covering 10 crore poor and vulnerable families and provide a cover of Rs 5 lakh per family per year for secondary and tertiary care hospitalisation.

The scheme was launched by Modi at Jangla village in Bijapur, officials said.

The Prime Minister's visit to the state coincides with the birth anniversary of Dalit icon BR Ambedkar.

The PM will launch the Ayushman Bharat scheme from a sub-health centre at Jangla and later inaugurate bank branches in seven villages, including Jangla, of Bijapur district, he said.

A newly-laid railway line between Gudum and Bhanupratappur will be commissioned through video-conferencing, the official said.

He said the line, part of the Dallirajhra-Rowghat railway project, will help connect the people of north Bastar.

The Prime Minister will also inaugurate the first phase of the state government's Bastar Net Project, which aims at expanding the reach of the Internet to the remote villages of the division.

As part of the project, an optical fibre cable network is being laid over an area of 40,000 square kilometres in Bijapur, Narayanpur, Bastar, Kanker, Kondagaon, Sukma and Dantewada districts of Bastar division, the official informed.

"The PM will address a public gathering at Jangla and then proceed to Jagdalpur from where he will leave by an Air Force plane for New Delhi at around 4pm," the official said.

This is the PM's fourth visit to the state since the NDA came to power in 2014 and second one to Bastar, having visited the area earlier on May 9, 2015.

The visit will be conducted under a massive security umbrella which will see the deployment of 10,000 personnel, including commandos from the elite Special Protection Group and jawans from the state's Special Task Force (STF), District Reserve Guard (DRG) and Chhattisgarh Armed Force (CAF).

CCTVs, drones and unmanned aerial vehicles (UAVs) have been deployed as part of security arrangements during the visit, said officials.

Naxal groups active in the area have opposed the PM's visit and have pasted pamphlets in several interior pockets of the district asking people to boycott the visit.