B.R. Ambedkar was very fond of blue. When he founded the Scheduled Caste Federation in 1942, he chose a blue flag. 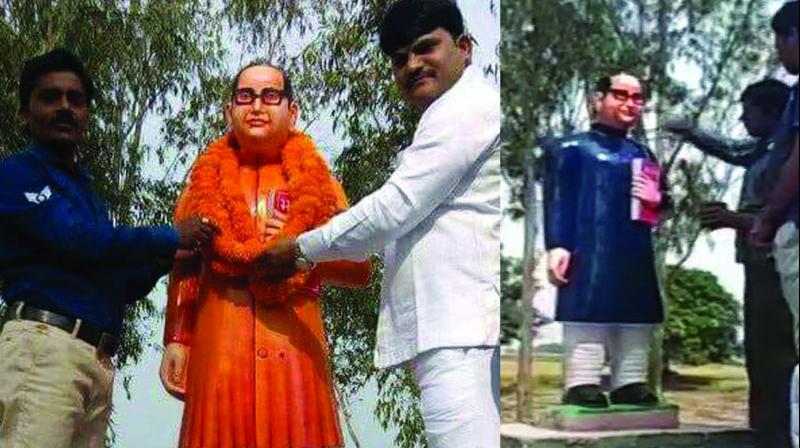 A statue of B.R. Ambedkar in Dugraiyya village in Uttar Pradesh’s Badaun district where his saffron coat was painted blue (right) after protests by dalits.

Few know that the blue colour became synonymous with the dalit movement in the country because B.R. Ambedkar always wore a blue coat. For dalits the colour became a symbol of empowerment and remains to this day.

Lucknow: Blue is the colour of tranquility but in the present scenario in the country, it causes anything but tranquility.

The colour is synonymous with dalits — their empowerment and their aggression — and almost every political party in the country is apparently keen to get a slice of the dalit cake. The battle to woo the marginalised sections is more bitter in Uttar Pradesh which witnessed outrage over an alleged attempt to install a “saffron” statue of dalit idealogue B.R. Ambedkar in Badaun district.

The BJP is trying to bring a tinge of blue into its sea of saffron, the Congress would also like its tricolour to get a larger share of blue and the Samajwadi Party is more than willing to bring blue into its red-green flag by befriending BSP which is already all blue.

But when and how did blue become the colour of the day for dalits in the country?

S.R. Darapuri, retired Indian Police Service officer and now a leading dalit activist, explained, "Blue is the colour of the sky and the sea and shows limitlessness.  Dr B.R. Ambedkar was very fond of the colour. When he founded the Scheduled Caste Federation in 1942, he chose a blue flag. Then in 1956, he founded the Republican Party of India and gave it a blue flag too. Dr Ambedkar always wore a blue coat and was internationally known for his colour choice. For dalits, the colour became a symbol of empowerment and it continues to this day because major dalit outfits represent themselves through this colour.”

Mr Darapuri said that blue is one of the primary colours of Buddhism and “Blue Buddha” is most revered. Dr Ambedkar, in his later years, had embraced Buddhism. In Buddhism, blue colour is associated with tranquility, compassion and kindness.

Dr Dauji Gupta, a social and dalit activist who worked closely with late Kanshi Ram, founder of said that blue has been synonymous with Dalit activism ever since Ambedkar emerged as a dalit icon.

“For dalits, blue is a colour that they call their own and no one has ever tried to change this. Dr Ambedkar was often seen wearing blue coat with a red tie, especially in the last three decades of his life, and the flags have always been blue for dalit outfits even though they may have differed with each other.”

Dr Gupta said that the recent case of Dr Ambedkar's statue being painted saffron was an example of some groups claiming political ownership of the dalit icon.

“Such an attempt will only backfire as blue colour is firmly ingrained as a symbol of dalit pride,” he said.

BSP state president Ram Achal Rajbhar, meanwhile, said that his party was formed to realise the dreams of Dr Ambedkar for dalits. “It is only natural that we take on blue which now represents dalit empowerment,” he said.

Ram Kinkar Gautam, a dalit writer, said, “Any community that is marginalised and deprived looks for symbolism to unite. The colour blue was promoted by Dr Ambedkar and became the colour of the dalit community. Simply raising a blue flag, today, symbolises dalit unity and parties like the BSP have only promoted it. Today, even if Ms Mayawati wants, she cannot change the colour of the party because blue is a bigger symbol for Dalits than even the BSP,” he said.

Prof Ramesh Dixit, a well known political scientist, said that symbolism has always been a strong factor in Asian societies - saffron for Hindus and Sufis and green for Muslims.

Dr Ambedkar wearing a suit had a huge impact on the oppressed people.

“In Ambedkar, they saw a glimmer of hope that a son of dalit family can rise to that level too. Gradually, the blue coat became synonymous with Ambedkar as you can see in his portraits and statues.” he said.

“Even though Ambedkar advised against forming a cult following, he became a symbol of struggle of dalits. And the colour of his coat became the colour for dalit movement in our country. I could not find any other significance or meaning of the colour other than that. However, the symbolism has become so strong today that any attempt to change this will invite resistance,” he explained.

For dalits, blue is a colour that they call their own and no one has ever tried to change this. Dr Ambedkar was often seen wearing blue coat with a red tie, especially in the last three decades of his life. — Dauji Gupta, social and dalit activist

In Ambedkar, they saw a glimmer of hope that a son of dalit family can rise to that level too. Gradually, the blue coat became synonymous with Ambedkar as you can see in his portraits and statues...— Ramesh Dixit, political scientist