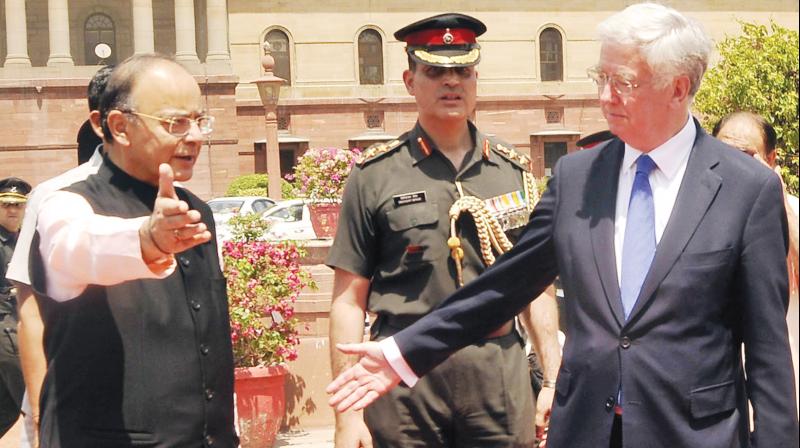 New Delhi: In a sign of the increasing prominence of India in United Kingdom’s military vision, visiting Britain’s defence secretary Michael Fallon and Union defence minister Arun Jaitley announced a forward-looking joint statement after a delegation-level meeting on Thursday that focused on cooperation in key military areas under the framework of the India-UK Strategic Defence Dialogue.

The statement emphasises on “commitments (that) will better enable the UK and India to meet the evolving threats and challenges that face democracies in the 21st century”.

Significantly, Mr Fallon’s visit is the third one by a UK Cabinet minister this month on the heels of chancellor of the exchequer Philip Hammond and energy minister Greg Clark. Mr Fallon is on a four-day India visit that concludes on Friday.

While the core aim is to enhance “mutual capabilities and effectiveness through joint training and doctrine development”, the visit reaffirmed and consolidated UK-India defence cooperation in the framework of the Defence and International Security Partnership, agreed in November 2015, and the subsequent joint statement between the two governments in November 2016.

Besides stronger military to military engagement, including training and advanced joint exercises, the “renewed engagement will place capability and technology development at its core and seek to harness the complementary strengths of both nations in defence manufacturing and use the combined strengths of their respective private and public sectors to develop defence solutions for use in both home and shared export markets,” the joint statement said.

Keeping the changed global security scenario in mind, counter-terrorism was a priority item on the agenda, especially to exchange information to track terrorist and pirate vessels which is significant in view of the increasing threat India faces from the seas and in the backdrop of the 26/11 Mumbai terror attacks in 2008 which exposed the vulnerability of India’s coastlines to forces inimical to the country’s interest.

India and UK will explore establishing a secure communications method in order to share classified material that may lead to upgrading their bilateral General Security Arrangement.

A trading arm of the UK defence ministry, the office is responsible for operational support to the Royal Navy and other defence customers.