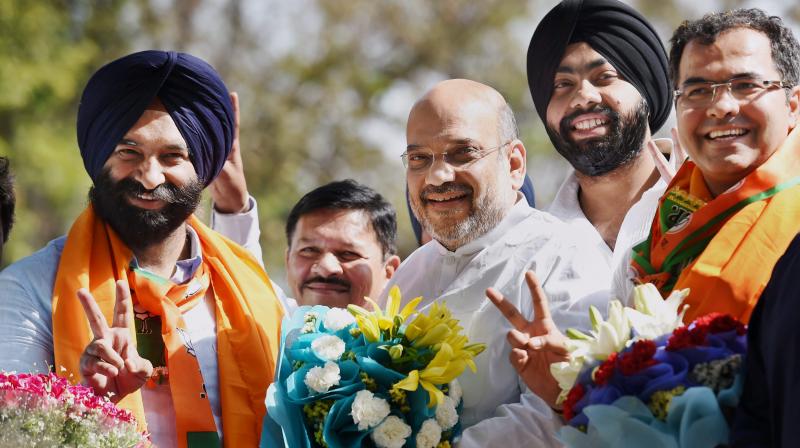 New Delhi: After routing the Opposition in the recent Assembly polls in five states, the BJP scored again by winning Assembly byelections in Delhi, Himachal Pradesh, Madhya Pradesh, Rajasthan and Assam. The results of the bypolls held in 10 Assembly seats and one parliamentary constituency were declared on Thursday, with the BJP bagging five Assembly berths. In Delhi, it got a shot in the arm ahead of the crucial MCD polls later this month by winning the Rajouri Garden Assembly seat.

Signs that the ruling Aam Aadmi Party could be losing ground in Delhi was evident as the party not only ended up in third place, behind the Congress, but its candidate even forfeited his security deposit. The Arvind Kejriwal-led AAP had won 67 out of 70 Assembly berths in Delhi in 2015.

For the Congress, that seemed in a downward spiral, there was some relief as the party won both Assembly berths in Karnataka and one in Madhya Pradesh. Prime Minister Narendra Modi hailed the BJP’s “impressive performance” in the byelections and thanked people for their “unwavering faith in the politics of development and good governance”. BJP president Amit Shah said his party’s win in the bypolls highlighted the people’s trust in the Narendra Modi government’s policies.

“Impressive performance by @BJP4India and NDA in bypolls in different parts of the country. Congratulations to karyakartas... I thank people for the constant support, blessings and unwavering faith in the politics of development and good governance,” Mr Modi tweeted.

Bypolls were held in two seats each in Karnataka and Madhya Pradesh, and one each in West Bengal, Assam, Rajasthan, Himachal Pradesh, Jharkhand and Delhi. In the Srinagar parliamentary constituency, that had voted on Sunday, a repoll was held in 38 booths on Thursday.

In West Bengal, the ruling Trinamul Congress retained the Kanthi Dakshin seat, where the BJP finished second; while in Jharkhand the JMM retained the Littipara (ST) seat, defeating the ruling BJP.

Congratulating the BJP chief ministers of Rajasthan, Madhya Pradesh and Assam, BJP chief Amit Shah also offered “special thanks” to the people of West Bengal for making the BJP “the principal Opposition party” in the state byelection.