Highlighting the divide created by the current government, Rahul Gandhi said that there is an ideological battle going on in India. 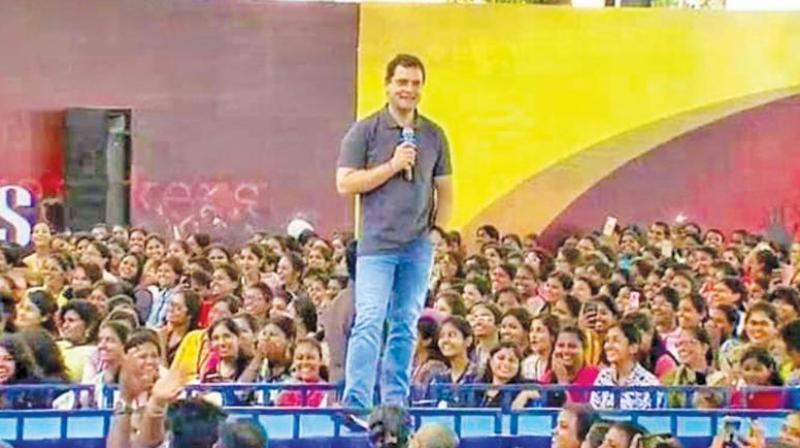 Chennai: Asserting that law must not be applied selectively, Congress president Rahul Gandhi said that PM Modi too should be probed for alleged corruption in the Rafale deal just as his brother-in-law Robert Vadra is under investigation for alleged money laundering and land deals. “I will be the first person to say it... Investigate Robert Vadra but also investigate Prime Minister Narendra Modi,” he said at a lively interaction with students of Stella Maris College for Women here on Wednesday.

“He understood his audience well and spoke about specific topics like women empowerment and the education system in the country,” said Karishma Angela Vincent, a third-year student. He also promised that 33 per cent of government jobs at all levels will be reserved for women if the Congress comes to power. “Frankly, I don’t see enough women in leadership positions. This a starting point and we cannot have women empowerment in India without a change in attitude and there is a lot to change with this attitude,” he said.

Further highlighting the divide created by the current government, Rahul Gandhi said that there is an ideological battle going on in India. “The religious, cultural divide is clear, he said and underlined the fact that the idea of ‘nationalism’ in the country is being defined by two ideology. One is a unifying ideology which says that all people of the country should live together and shouldn’t be dominated by one idea. The other ideology the other is that of the Modi Government. If one defies them, they are termed ‘anti-national,’ he said and the ideological shift is harm to development,” Karishma said.

Speaking to Deccan Chronicle, third-year sociology student Abhinayaa Sampath said that the question was a follow-up after a slew of them on demonetization and the recent Pulwama attacks. “Rahul Gandhi was speaking about how money is abused in the hands of the rich. Through that, many more questions, including the one on Robert Vadra was shot at him, to which he replied that everyone should be investigated with such ease,” she said.