With the passage of the Finance Bill and the Appropriation Bill, the budget exercise is complete in the lower house. 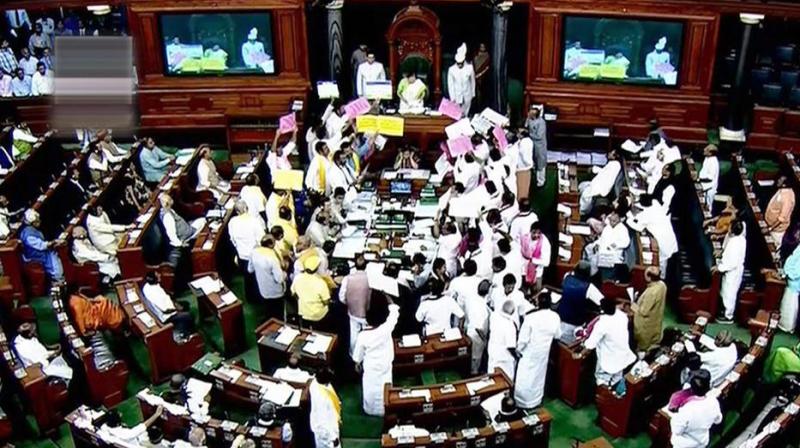 New Delhi: The government on Wednesday got the Budget for the fiscal year beginning April 1 passed in Lok Sabha without discussion by applying the guillotine process as the opposition paralysed the functioning for the eighth day.

Finance minister Arun Jaitley moved the Finance Bill 2018, which contains taxation proposals of his last full budget, as well as the appropriation bill that details spendings in various departments, amid din created by slogan-shouting opposition. The bills were passed by voice vote.

The ruling BJP-led NDA has an absolute majority in the Lower House of Parliament.

The appropriation bill was approved after a guillotine was applied which essentially means that all outstanding demands for grants from various departments are put to vote at once whether they are discussed or not.

With the passage of the Finance Bill and the Appropriation Bill, the budget exercise is complete in the lower house.

Technically, the two Bills also have to go to Rajya Sabha but since they are money bill they would be considered approved if the Upper House of Parliament does not return them within 14 days.

The Opposition has an upper hand in the Rajya Sabha.

The functioning of both houses of Parliament has been stalled since the second half of the Budget session began on March 5 as opposition parties raised issues ranging from India’s biggest bank fraud to division of Cauvery river water and special package to Andhra Pradesh.

Neither Lok Sabha or Rajya Sabha has transacted any substantial business in the past eight days.

Earlier this week, the BJP had issued a three-day whip to its members to be present in the House.

Budget passage is a constitutional obligation without which the government cannot spend a single penny on its functioning.

Opposition parties protested against passing of the Budget without a debate as the session is to continue till April 6.