They used to depend on their weapon supply chain to procure ammunitions and rockets. 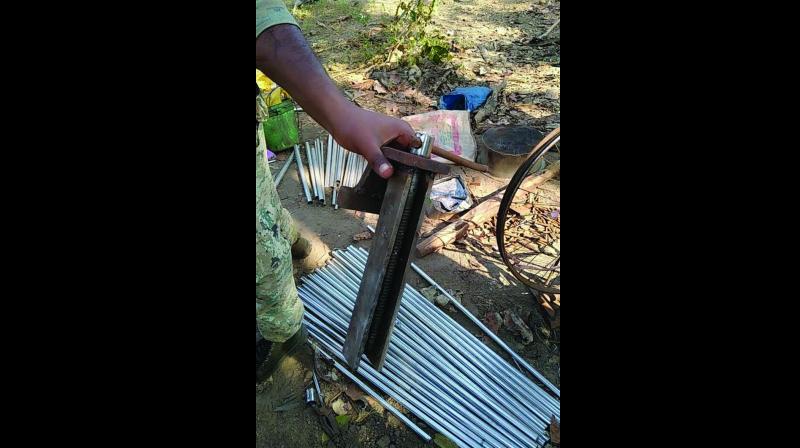 Naxals have filled their armoury by looting firearms such as AK 47 and Insas assault rifles and UBGLs from security forces in the encounters with them.

Bhopal: Weapon manufacturing units run by Maoists in Chhattisgarh’s Bastar region are making rockets and bullets from their respective empty shells left behind by security forces after counter-insurgency operations.

A  weapon manufacturing unit busted by the 204 Cobra (commando battalion for resolute action) battalion personnel at Irapalli in Chhattisgarh’s south Bastar district of Bijapur three days ago has brought to light the skill acquired by Naxals to make firearm ammunitions in their ‘factories’ in the jungles.

“A gun-making factory has been busted in Irapalli. Tools used for making bullets for various firearms and rockets for Under Barrel Grenade Launchers (UBGL) has been seized.

Many empty cartridge and rocket shells have been found at the site. Besides pipes and tools for making guns, improvised explosive devices (IEDs) and mortar bombs have also been seized at the encounter site,” a senior CRPF officer posted in Raipur in Chhattisgarh told this newspaper on Thursday.

The seizures have led to disclosure that Maoists used to collect the empty shells of firearm ammunitions and rockets left behind by security forces after the encounters to reuse them by filling them up with explosives and other materials, the officer said unwilling to be quoted.

Naxals have filled their armoury by looting firearms such as AK 47 and Insas assault rifles and UBGLs from security forces in the encounters with them. They used to depend on their weapon supply chain to procure ammunitions and rockets. However, the supply chains often used to be busted by security forces putting Naxals under pressure.

Two Cobra commandos were martyred and five others injured in the encounter with armed Maoists at Irapalli, considered the bastion of Maoists’ battalion number one, on February 10.

Body of a Maoist identified as Madvi Hunga, body guard of Sonu who commanded company number one of CPI (Maoist), was recovered at the encounter site.

The counterinsurgency operation was launched by Cobra commandos following intelligence tip off on gathering of large number of armed Naxals including battalion number one commander Hidma in Irapalli.