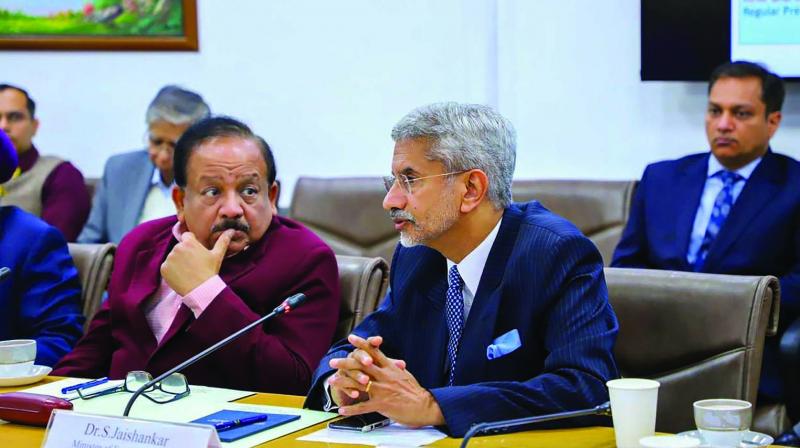 Union health minister Harsh Vardhan and external affairs minister S. Jaishankar during a meeting of high-level Group of Ministers (GoM) to review the actions for prevention and management of novel coronavirus in New Delhi on Thursday. (Photo: PTI)

New Delhi: One passenger on board SpiceJet Bangkok-Delhi flight was quarantined at Delhi while two passengers, who arrived at Kolkata from Bangkok, have been placed in isolation for suspected novel coronavirus (COVID-19) symptoms.

“On February 13, 2020, a passenger travelling on SpiceJet flight SG-88 operating between Bangkok and Delhi was suspected of coronavirus infection. He was on seat no. 31F and was the only passenger in that row. The said passenger was quarantined by Airport Health Organisation (APHO) after landing in Delhi,” the SpiceJet said.

At Kolkata airport, a passenger named Himadri Barman was quarantined on Tuesday, and Nagendra Singh on Wednesday, officials said. Both passengers were sent to Beliaghata ID Hospital, a Kolkata airport official said.

In India, three cases have been confirmed so far in Kerala while two Indian crew on board cruise ship Diamond Princess off the Japanese coast have tested positive for the COVID-19.

Union health minister Harsh Vardhan said PMO and health ministry are screening airport to prevent the spread of the novel coronavirus in India. He told the media that border areas are constantly monitored and screening facilities in airports are constantly being updated to deal with if new coronavirus cases arise. He said flights arriving from Bangkok, Singapore, Kula Lumpur and Hong Kong will be screened for coronavirus cases.

Dr Vardhan said that all 645 Indians, including 7 Maldivians, evacuated from the coronavirus-hit Wuhan city are likely to be discharged once all of them test negative after a stay of 14 days.

“India has extended support to the Maldives in testing samples and Bhutan in managing COVID-19. India has agreed to support Afghanistan in testing samples. India is also extending help to China by sending essential items for combating COVID2019 in China as per commitment of the Prime Minister,” the minister said following a meeting of the group of ministers (GoM) on this issue.

He added that people are being screened for coronavirus at 21 airports, 12 major ports, 65 minor ports and at 6 land crossings and all states have been informed of guidelines and precautionary measures.

A total of 15,991 persons are being followed up for 28 days of which 3,058 have completed 28 days of observation period. As many as 497 suspect cases have been isolated.