India   All India  14 Feb 2018  Mr Finance Minister, your Budget looks like another act of deception
India, All India

Mr Finance Minister, your Budget looks like another act of deception

This government, since it took to power, has been attempting to manage public perception without much action on the ground. 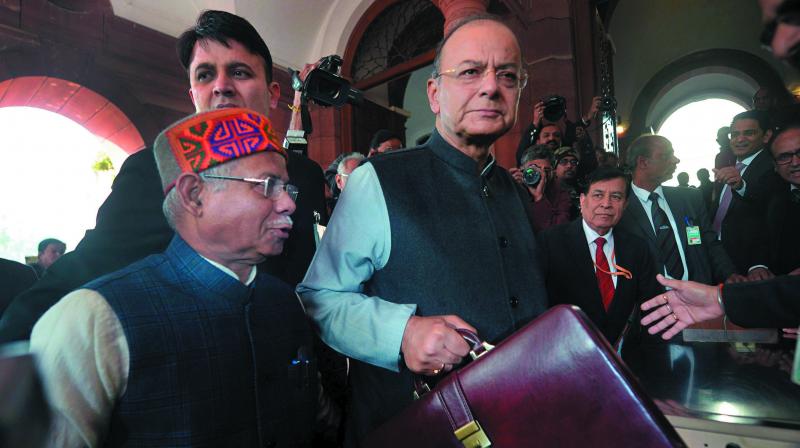 Finance minister and Arun Jaitley with the minister of State for Finance Shiv Pratap Shukla arrives at Parliament House to present the Union Budget 2018-19, in New Delhi. (Photo: PTI)

This Budget clearly reflects the government’s character of deceiving people into believing that it is working for them. It looks more of an election manifesto rather than the Budget document, which is supported by serious stuff. This government, since it took to power, has been attempting to manage public perception without much action on the ground. There is nothing to stimulate corporate investment, which translates into low job generation scenario. Unfortunately, the future doesn’t look bright.

In this column, besides other claims, we will discuss in detail the two announcements that the government asserts will bring the desired change in the society. First - The announcement of Rs 5 lakh health insurance benefitting over 50 crore population and Secondly the empathy it endeavors towards poor farmers.

The insurance scheme of Rs 5 lakh health benefitting 50 crore people is just an eyewash. This announcement squarely underlines the failure of the government in creating required infrastructure both in primary and super specialty tertiary healthcare. The announcement clearly is a populist measure, which cleverly is being used as a veil to hide its incompetence. The poor in the country incur mammoth out-of-pocket expenditure only because there is non-availability of robust public healthcare especially in non-metros.

The allocation on this is Rs 2000 crore. Now where is the infrastructure? There are no doctors, no para-medical staff, no medicines, and no properly working equipments in non-metros. In absence of such facilities, where will the poor spend this money?

The allocation for health sector in the current Budget stands at Rs 54,600 crore which, considering inflation, is Zero increase from last year’s allocation of Rs 53,294 crore. Even the government’s flagship programmes such as Pradhan Mantri Swasthya Suraksha Yojna, which is aimed at building AIIMS like institute and upgrading medical institutes, did not fetch any significant increase in terms of funds. On the contrary, funds to upgrading district hospitals have shrunk by over 14 percent.  Now without infrastructure how will the government ensure health for the poor?

It is a wrong step to choose insurance as a substitute for public infrastructure and it can be counter productive. The unregulated private healthcare sector will misuse this insurance scheme and inflate the healthcare cost, which in turn would increase pressure on exchequer. In all probabilities, this move to buy health for the poor looks flawed.

Lets us also see how empathetic the government is towards the farmers, who have been struggling and agitating for two things - remunerative price for their produce, and freedom from debt. Everyone was expecting loan waiver, which could have been partial or conditional if not full. And it pains more given the fact that the government has promised to look for loan waivers for small industries and for the bigger ones the waiver has already been granted via bank recapitalization. How can the government overlook the farmers, who feed the country?

Here the big disappointment is the announcement on farm prices. The government has cleverly changed the context. The Swaminathan Commission had recommended the ‘cost-plus-50 percent’ formula. While the commission clearly says ‘cost’ meant comprehensive cost, which includes labour cost, rent expenditure and other expenditures. While the government shrewdly picked up a partial cost estimate, besides there is no allocation made for this. Also missing was the critical explanation as to how the farmers will effectively secure this MSP?

The government’s announcement of doubling of farm incomes is likely to fall flat on its face. The same has been promised since the first budget of the government. The kind of investment required achieving this are nowhere in sight. All these announcements have single focus – Lok Sabha elections 2019.

All this is pointing towards a high inflation regime and with this inflationary Budget, there is no elbowroom for RBI to even think of cutting interest rates. In the scenario of interests rates going up, Indian industry will lose the competitive edge on exporting goods, which in-turn would put pressure of already struggling ‘Make in India’ scheme.

It is also disappointing to see the allocation on education and research. India’s spending on research, as a percentage of GDP has been 0.6 to 0.7 percent. Now look at China, which spends 2.1 percent and the US stands at 2.8 percent. Mind you their economic bases are much larger as compared to India. With such allocations and non-availability of infrastructure how can we expect PhD students in IITs and IIScs to do their research?

The actual work on ground and what government claims to do are just opposite. With all such slogans ‘Beti bachao, Beti Padhao’, ‘Skill India’ the government wants people to believe it is very bullish on education. However, the reality is - a large number of higher education institutions, almost 40% of teaching positions have been lying vacant for several years. And even if the government has best of intention to fill these positions it will not be easy given the tight budgetary resources

Linked to education is employment. Because of the revenue shortfall, the fiscal deficit had increased over 100 percent of the target by December 2017. Given the increasing fiscal deficit the government will have to sharply cut expenditures. And these cuts will happen in sectors including education, health, skill development, which clearly means decline in employment generation. Job creation has long been neglected. In 2014, the promise was to employ 2 crore youths every year. The promises remain far from fulfilled and the revised target of generating employment is 70 lakh every year.

The intent of “helping the poor” falls flat when you see Zero increment in the budget for the Mahatma Gandhi National Rural Employment Guarantee Scheme from the current Rs 55,000 crore. The current funding too is inadequate to pay the wages even in this very financial year. States have used the funds and have been demanding more money to pay the pending wages.

On one hand the government promises bullet trains and world-class transport infrastructure, while on the other hand it cuts allocation to Indian Railways that badly needs money. How does it plan to increase the facilities and implement safety features if the existing allocation (which in itself is not adequate) is reduced by whopping Rs 15,000 crore. The budget for Indian Railways has been cut down to Rs 40,000  crore from Rs 55,000 crore.

Nevertheless, the government is doing all its bit to market this Budget as pro-poor. But the fact is it serves only the less than one percent richest. Government has miserably failed delivering on its own promises of last four years – creation of jobs, brining back money from Swiss Bank Accounts, doubling farmers’ income. And this Budget looks like a bag full of promises, yet again.

The writer is associated with the Indian National Congress and is a former chairman of the Andhra Pradesh Electronics Corporation.