5 killed in explosion inside ship in Cochin 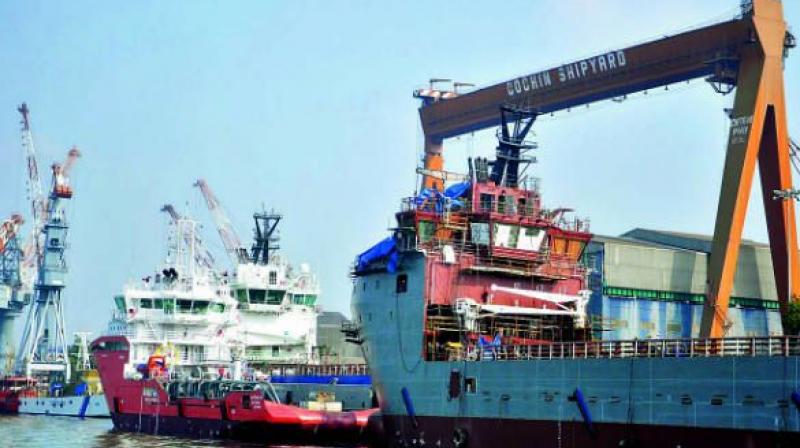 One of the workers, K.P. Jayan, who later died, was the first to report gas leakage near the AC compartment area of the ship.

Kochi: Five workers were killed and seven others injured, one seriously, in an explosion on ONGC drillship Sagar Bhushan that was undergoing repairs at the Cochin Shipyard here on Tuesday morning.

The blast occurred at 9.15 am when at least 12 workers were engaged in cutting and welding of steel plates inside the potable water tank at double bottom half of the ship in its forward area.

One of the workers, K.P. Jayan, who later died, was the first to report gas leakage near the AC compartment area of the ship.

Immediate instruction was passed on to stop all hot works and the fire force was informed. However, by this time the explosion occurred in the forward area of the ship near  the AC plant.

“Five workers died while we evacuated 12 others. What made rescue operations difficult was thick plumes of smoke emanating from the tank at the bottom portion,” said Madhu S. Nair, chief managing director, Cochin Shipyard Ltd.

The dead were identified as senior fireman C.S. Unnikrishnan, a native of Eroor near Tripunithura, safety assistant (contract) Gevin Reji of Adoor in Pathanamthitta, contract workers K.B. Jayan of Kochi,  M.V. Kannan of Eroor near Trippunithura and M.M. Ramshad of Malipuram.

Among the injured the condition of P.T. Sreeroop, hailing from Kochi, is critical with 45 per cent burns. The other injured include T. Abhilash  of Kollam, Jaison Varghese of Udayamperoor, Sanju Joseph of Kottayam, Rajan Ram of Uttar Pradesh, K.K. Tintu and P.X. Christin,  both hailing from Kochi.

“It’s a dark day in the history of the shipyard. An immediate ex-gratia Rs 10 lakh will be provided to the kith and kin of the deceased. This will be over and above all other statutory obligations,  including treatment exp-enses,” Mr Nair said.