Guntur District Collector has also served a notice to Vemula's mother inquiring how she can prove that she is in fact of Dalit category. 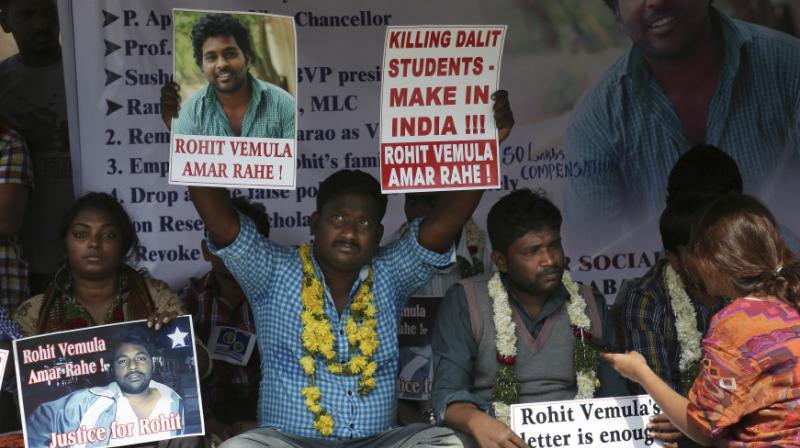 Hyderabad: The Andhra Pradesh government has said that Rohith Vemula, the research scholar from the University of Hyderabad whose suicide caused nationwide stir on the issue of Dalit oppression, belongs to Other Backward Classes (OBC) and not Dalit.

According to a Hindustan Times report, the state government deemed the Scheduled Caste (SC) certificate "fraudulent" and stated that the certificate was acquired unfairly by Rohith and his mother Radhika Vemula.

Guntur District Collector Kantilal Dande has served a show-cause notice to Radhika seeking clarification why she cannot be declared a part of the Vaddera community of the OBC category. She can claim to be a Dalit only on condition that she provides requisite documents in that regard within the next two weeks.

"Based on the DLSC report, we have decided to cancel the Dalit certificate fraudulently obtained by Rohith and his mother and declare them as belonging to OBC community. As part of the procedure, we have served a notice on Radhika to prove her claim of Dalit within 15 days. Otherwise, she and Rohith would be declared as OBCs,” Dande said.

Radhika's other son, Raja Vemula confirmed the receipt of the notice served by the Guntur administration.

“They gave her two weeks’ time to prove that she indeed belonged to SC community and not an OBC. We are consulting our lawyers to study the notice and give a proper reply,” Raja said.

The Andhra Pradesh government intended to send the report on Vemula, belonging to the OBC category, to the Centre before his first death anniversary on January 17, but refrained to avoid certain entailing legal issues.

A one-man judiciary, headed by former Allahabad High Court judge Justice AK Roopanwal, had also in August 2016, declared that Vemula belonged to OBC, stating that the false SC certificates were acquired by Radhika Vemula to avail the benefits of reservation.