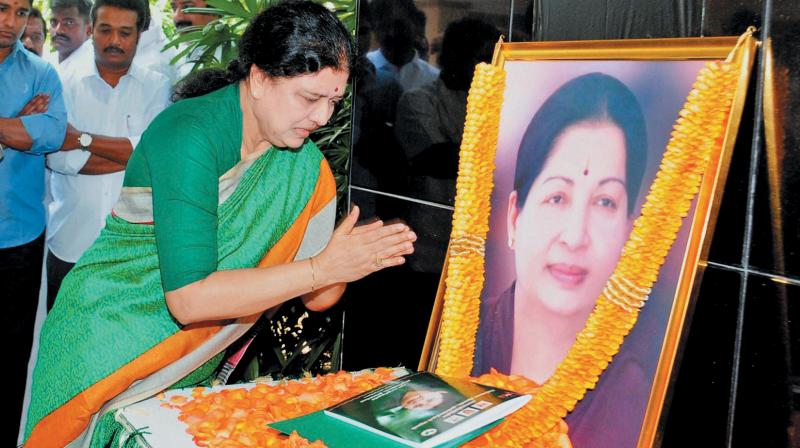 New Delhi: Chennai's Poes Garden, residence of late J Jayalalithaa, was the hub of conspiracy and the money flow from one account to another proved the existence of an "active conspiracy" to launder the then Chief Minister's "ill-gotten wealth" to purchase properties in the names of the shell companies, the Supreme Court said today.

The apex court said V K Sasikala and her two relatives -- V N Sudhakaran, Jayalalithaa's foster son, and Elavarasi, the widow of Sasikala's elder brother, resided at Poes Garden with Jayalalithaa "without any blood relation between them".

They were "accommodated" there, not on humanitarian concern, but pursuant to the conspiracy hatched by them. "The flow of money from one account to the other proves that there existed active conspiracy to launder the ill-gotten wealth of Jayalalithaa for purchasing properties in the names of the firms," a bench of Justices P C Ghose and Amitava Roy said while convicting Sasikala and her relatives in the 19-year-old disproportionate assets case.

"The joint residence of all the accused persons also could not be ignored as a factor contributing to the charge of conspiracy and abetment, when assessed together with the attendant facts and circumstances reinforcing the said imputations," the bench said.

"The unimpeded, frequent and spontaneous inflow of funds from the account of Jayalalithaa to those of the other co-accused and the firms/companies involved, overwhelmingly demonstrate the collective culpable involvement of the respondents in the transactions in the face of their overall orientations so as to render the same to be masked banking exchanges though involving several accounts but mostly of the same bank. No other view is possible," the apex court said.

The bench said these companies were "operating" from Poes Garden and "it cannot be accepted that she (Jayalalithaa) was unaware of the same even though she feigned ignorance about the activities carried on by Sasikala and two others. They were residing with Jayalalithaa without any blood relation between them".

The bench held that though Sasikala and her relatives had claimed to have independent sources of income, the fact regarding setting up of these firms and acquisition of large tracts of land out of the funds provided by Jayalalithaa indicated that there was a conspiracy among them.

The apex court also said that the conspiracy cannot be proved by direct evidence and has to be essentially inferred from the proven circumstances, "the ultimate conclusion with regard thereto has to be deduced from the attendant state of affairs cumulatively taken".

"It is a trite proposition that in the case of conspiracy, each member thereof becomes the agent of the other and in law is bound by their actions inter se," it said.

The bench further said that so far as Jayalalithaa and Sasikala are concerned, "one is the agent for other as partners of two firms and additionally Sasikala is the attorney of Jayalalithaa and is a co-conspirator, as imputed".

It referred to the statement of a prosecution witness and noted that a "blanket instruction" was issued by Jayalalithaa that the directions made by Sasikala from time to time "ought to be followed and consequently the latter was to decide in which account the huge cash deposits were to be made".

"The numerous inter accounts transfers would only corroborate massive unaccounted cash deposits being made, the origin whereof had been number 36, Poes Garden, Chennai. For all intents and purposes, these accounts were construed to be one," the bench noted.