Massive protests have erupted in the area following the killing of the militant in the encounter. 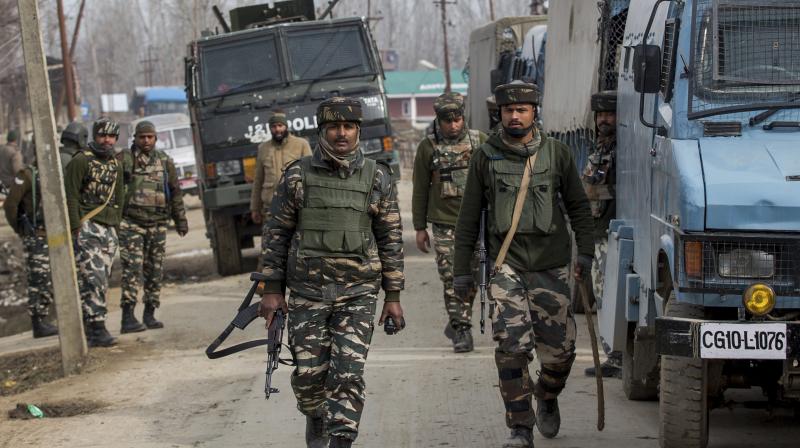 Indian army and paramilitary soldiers leave the site of a gun battle with suspected rebels in Hajin Village, northeast of Srinagar in Jammu & Kashmir on Tuesday. (Photo: PTI)

Srinagar: Three Army jawans and a militant were on Tuesday killed in a fierce gun battle in Hajin area of Kashmir’s northern Bandipore district.

Four J&K policemen, a civilian, and five other soldiers including an officer, a CRPF officer, were injured, officials said, adding that the operation has been "terminated".

The injured officers and soldiers have been brought to Srinagar and admitted to the Army’s 92-Base Hospital at Badami Bagh Cantonment in Srinagar. The Army sources said that the condition of injured Major BS Thapa of 13 Rashtriya Rifles is “critical.”

The injured CRPF officer is Chetan Chita, the Commandant of its 45 Batallion whereas other injured soldiers have been identified as Sepoys Mukesh Chandra Bhatt and Jatinder Singh and Ptrs Sandeep Kumar and Ravi Kumar.

The Army said that the names of the slain soldiers would be released only after their respective families are informed officially to follow the procedure.

The bloody clash comes two days after four militants of Lashkar-e-Taiba and Hizb-ul-Mujahedin, two soldiers and a civilian were killed and an Army Major, two soldiers and a policeman were injured in a similar incident in Nagabal village of southern Kulgam district’s Frisal area.

The Army sources in Srinagar said that the troops of its 13 and 31 Rashtriya Rifles, the members of J&K Police’s counterinsurgency Special Operations Group (SOG) and the CRPF’s 45 Battalion laid siege to Hajin’s Parray Mohalla at dawn on Tuesday following inputs about the presence of militants in a private house.

“The terrorists were challenged and asked to lay down their arms but they responded by opening fire at the searching party, triggering the encounter,” said a defence spokesman. He added that three Army jawans lost their lives whereas one militant was also killed in the fire fight.

The police sources, however, said that the lone militant holed up in the house hurled a grenade at the security personnel causing deaths and injuries among them before he was shot dead.

Latest reports from Hajan said that massive protests have erupted in the area following the killing of the militant in the encounter. The civilian injured during the encounter has been identified as Hilal Ahmed. Eight people were injured in police action at Saderkot in Bandipore, the reports said, adding that five of them were hit in pellet shotgun firing by police.

On Sunday, a similar situation had led to intense clashes between local residents protesting and mourning the killing of four militants and a civilian during the Nagabal, Frisal (Kulgam) encounter.

The face-off between the violent protesters and security forces had led to the killing of another civilian and injuries to over a dozen others in firing, heightening tensions across the Kashmir Valley. A general strike called by an alliance of key separatist leaders shut the Valley on Monday.