There were 406 such incidents, which include IED and ordnance explosive blasts, in the country. 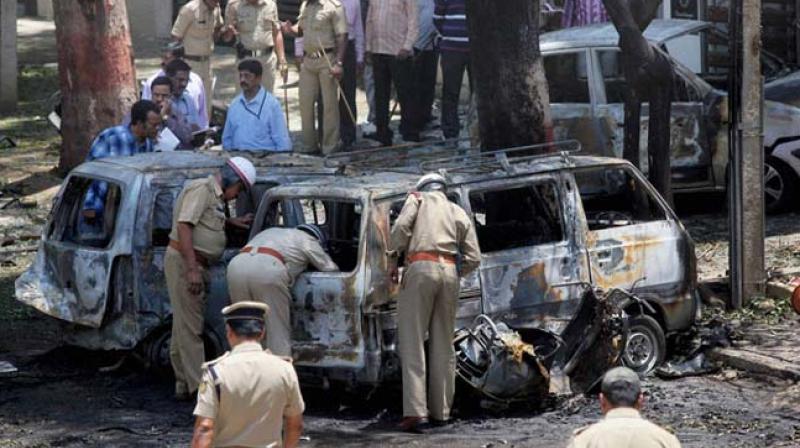 March proved to be most deadliest in India with a maximum of 42 incidents being recorded in this month in 2016. (Representational Image)

New Delhi: India witnessed the maximum bombings in the world last year, even more than war-torn Iraq and Afghanistan, according to a report.

There were 406 such incidents, which include IED and ordnance explosive blasts, in the country. Iraq came second with almost half the number at 221, the report by the National Bomb Data Centre (NBDC) said though it did not mention the casualties.

NBDC functions as the nodal post-blasts investigation department under country’s federal contingency force NSG. The report did sound a word of caution on the global data saying the centre obtained these figures from “open source“.

Neighbouring Pakistan witnessed a total of 161 incidents during 2016 followed by Afghanistan where 132 bombings were recorded, 92 in Turkey, 71 in Thailand, 63 in South Africa, 56 in Syria, Egypt 42 and 29 in Bangladesh among others.

“This does not reflect the exact number and details of the incident,” the National Security Guard’s NBDC said in its annual compilation of such incidents called ‘Bombshell’.

Out of the total 406 incidents reported during this period in India, 337 were triggered using Improvised Explosive Devices (IEDs) while the rest 69 occurred using ordnance explosives like grenades or ammunition shells.

The report delved deeper and analysed that the maximum of IED blasts in a week in India, at 63, occurred on Thursdays, followed by 50 on Wednesdays and so on.

March proved to be most deadliest in India with a maximum of 42 incidents being recorded in this month in 2016 followed by 36 in April. “The data...has been obtained from police records available from time to time. This does not reflect the exact number and details of the incident,” the report added.

The NBDC report, published last week, also reported that Jammu and Kashmir saw an over 121 per cent rise in blast and IED related incidents after the killing of terrorist Burhan Wani in the Valley in July last year.

While 14 IED bombing incidents were reported in JK in 2015, the numbers went up to 31 last year. “J and K saw an increase in blast incidents and casualities particularly after the death of Burhan Wani,” the report said. The fatalities by way of IED blasts in J and K last year rose to five from four in 2015. Non-fatal causalities in the state also rose from 21 to 36 during the same period, the report added.

Talking about the targets of these bombings, both IED and ordnance explosives, the report found in J and K “security forces remained the prime targets of the terrorists” last year.

The maximum attacks at 55 per cent were faced by security forces followed by members of public 41 per cent and VIPs 4 per cent in the state.