Even though the protests have remained peaceful so far, the Jat leaders have threatened to intensify protests if their demands were not met. 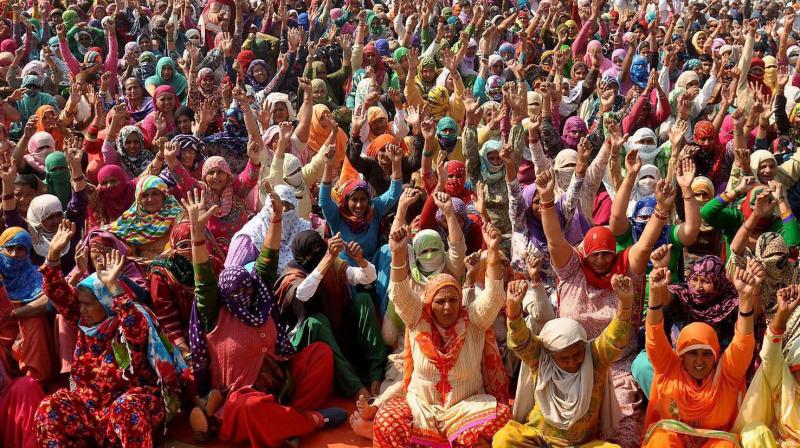 Chandigarh: The Jat agitation in Haryana which sought reservation in education and government jobs among other demands entered its 17th day on Tuesday.

"Our protests are held in all the districts of Haryana and it is spilled over to Bawana village in Delhi today," Yashpal Malik, president of the All India Jat Aarakshan Sangharsh Samiti (AIJASS), which is spearheading the agitation, told PTI.

Sit-ins and dharnas continued in many areas across the state.

Three days ago, a meeting between representatives of a Haryana government-appointed committee and leaders of the Jat agitation remained inconclusive.

Even though the sit-ins have remained peaceful so far, the Jat leaders have threatened to intensify the stir after February 19 if their demands were not met immediately.

Haryana's Additional Chief Secretary, Home Department, Ram Niwas, who is part of the government-appointed committee of senior officers, said that the government is closely monitoring the situation.

"The situation so far has remained peaceful", he said.

Besides seeking quota in education and government jobs under the Other Backward Classes (OBCs) category, the demands of the Jats include the release of those jailed during last year's agitation, withdrawal of cases slapped during the protest and government jobs for the kin of those killed and injured while taking part in the stir.

The BJP government in the state had last week formed a five-member committee, headed by Chief Secretary D S Dhesi, to hold talks with the agitating community.

February 19 would be observed as 'Balidan Divas' at different places in the country in the memory of those who lost their lives during last year's agitation, Malik said.

During the fresh round of the agitation, the protesters have been staging dharnas at various places in the state amid elaborate security arrangements.

In view of the fresh Jat stir, paramilitary forces have been deployed in sensitive areas, while the state police are maintaining a strict vigil.

As many as 30 people were killed and property worth crores of rupees was damaged at many places in Haryana during last year's Jat stir which had turned violent.

However, this time the state has been put on maximum alert, the officials said.