India   All India  14 Jan 2019  Fire breaks out at camp at Kumbh Mela premises in Prayagraj
India, All India

Fire breaks out at camp at Kumbh Mela premises in Prayagraj

Multiple tents were engulfed in the fire which erupted after a cylinder exploded in a tent at camp of Digambar Akhada. 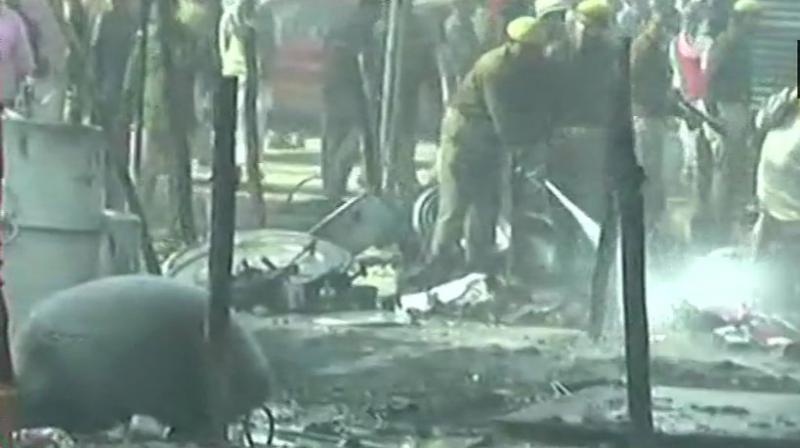 According to police officials, the fire has been doused and the area is being cleared now. (Photo: Twitter | ANI)

Prayagraj (Allahabad): A massive fire broke out at a camp in the 2019 Kumbh Mela in Prayagraj on Monday, a day before the fair officially opens.

According to reports, multiple tents were engulfed in the fire which erupted after a cooking gas cylinder exploded in a tent at the camp of Digambar Ani Akhada.

There were no reports of any injuries or casualties, police officials said.

Soon after, six fire tenders and eight ambulances were rushed to the spot. Firefighters took about 10 minutes to control the blaze which engulfed the makeshift structure at the venue.

Two vehicles and some materials kept at the site were damaged in the fire, they said. The head of the Digambar Ani Akhada said the fire began at an adjoining tent and spread to the kitchen of their camp, triggering the cylinder blast.

Kumbh Mela is celebrated four times over a course of 12 years. More than 12 crore people are expected to take part in the event over the next 50 days.

The 2019 Kumbh Mela will commence on January 15 on Makar Sankranti which will be the first bathing day. Mahashivratri on March 4 will mark the last bathing day. Devotees take holy dips at the sacred confluence of the Ganga, the Yamuna and the mythical Saraswati.