India   All India  14 Jan 2019  A film on real life story from Kashmir makes it to silver screens in Europe
India, All India

The Call of Pashmina highlights lives of nomads, shepherds, weavers, craftsmen and women associated with trade in Kashmir. 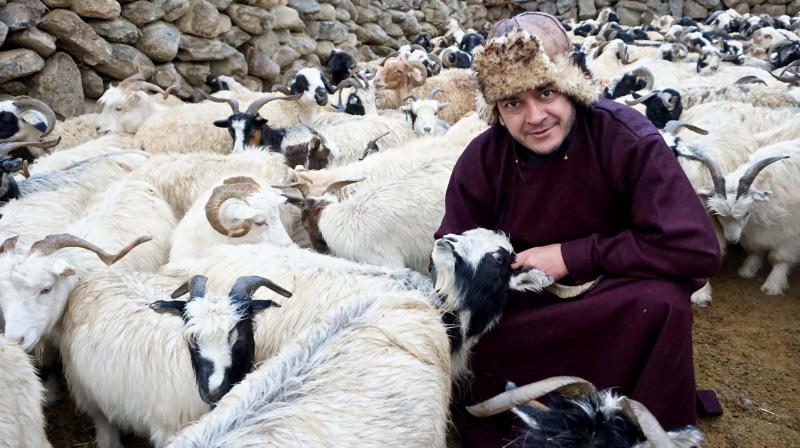 Babar Afzal with a herd of Pashmina sheep and goats in the Himalayas.

Srinagar: A documentary on a real life story from Jammu and Kashmir has made it to top silver screens in United Kingdom, Pennsylvania, Germany, Arizona and Colorado.

The Call of Pashmina, made by Emaho Films and sponsored by Jnana Foundation is a compilation of work and mission of Babar Afzal, a “silent runner” who has built a beautiful case of authentic Pashmina industry of J&K globally. He has through his work successfully highlighted the lives of nomads, shepherds, weavers, craftsmen and women associated with trade back home.

The documentary has been screened at international documentary film festivals in India and abroad through official selections and has won multiple international awards. It is a “positive story” from militancy-ravaged J&K which is inspiring the world. It is being screened in different parts of the world at a time when Bollywood films on real-life characters are hitting the screens and doing tremendously well.

“‘The Call of Pashmina’, mirrors the passion and dedication that Babar has towards understanding the ground realities of the authentic Pashmina eco system of India, and how he wants to expose the realities of the lives of the people including shepherds, weavers, craftsmen and women to the world and then how he charts out a brilliant career path around solving a problem that has one million people directly and indirectly linked to the industry eco system’, said a critique. He added, “His work and life’s journey have become an inspiration for millions of youngsters and budding entrepreneurs globally. His work and approach are gaining momentum across the sustainable fashion and sustainable luxury industries across the world.

Babar said, “Documentaries are an interesting medium to share one's story with the world. I'm both excited and nervous to see my story being picked up by renowned directors and being officially selected to be unfolding on the screens internationally.”

He believes that the film has nicely presented the problems that the eco system is facing back home. “I’m sure it will inspire the youth around the world to look at real life problems that desperately need solutions,” he said. He added, “Recognition at any level is a big responsibility and it has always forced me to work harder, reject my own ideas of yesterday, learn and upgrade my skills and look at the problem in a more holistic manner”

Babar is a resident of J&K who left his corporate life after reading the news about 25,000 Pashmina goats perishing due to starvation in the Himalayas. That moment changed his life completely and turned him into a Pashmina artist, activist and a shepherd. He is now advocating for this community around the world and sensitizing the global audience about the eco-system. Babar’s journey is unique in many ways as he is exploring all possible mediums to understand and then address the problems that the eco-system is facing. “I had no background in Pashmina other than my family and friends being heavily into Kashmir handicrafts manufacturing and exports who had been tuned to looking at everything through the lens of commerce.  But no one I knew was sensitive towards the big picture”. And the big picture was the plight of poor shepherds, weavers and artisans including women-the actual producers of Pashmina and their exploitation by big traders.

Despite facing opposition mainly from the vested interest including those in the trade, he has been able to highlight the issues the artisans and weavers are facing. “If you ask me what have I achieved so far I will say I have just begun and I am happy today that the Pashmina buyers have started to ask tough questions to the sellers, which is a good beginning from my point of view,” he said.

An ex McKinsey Analyst and a Silicon Valley professional, an author and the founder of Pashmina Goat Project who dropped out of his technology and corporate career and chose to become a shepherd in the Indian Himalayas has an undying passion and a rock solid resolve as a Pashmina expert to change the future of many people who are linked to the authentic Pashmina eco system of India. His work has received appreciation and support from different quarters in India and abroad and has also won him many awards. He has authored a book ‘6 TIMES Thinner, the Call of Pashmina’ where he shares the wisdom of shepherds, which he believes are the lessons he received while he was living with them.

“These lessons are the key to problem solving in the 21st century,” he said. Recently, he was invited by the British Parliament to speak at the House of Commons to share his life and work and build a case for authentic Pashmina of India.

Tags: the call of pashmina