Manan Kumar Mishra and Prabhakar said the judges were very receptive to the suggestion to resolve the issue. 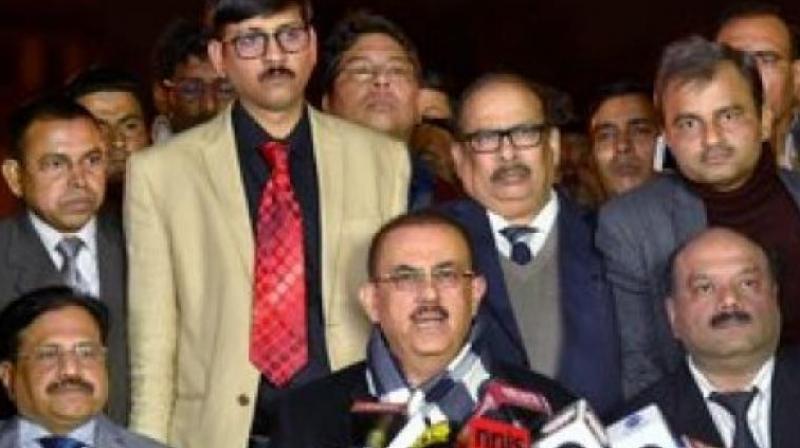 The Council hope and trust that the Hon’ble Judges of Supreme Court would realize the seriousness of the issue and in future avoid any such situation. (Photo: PTI/File)

New Delhi: A seven member team from the Bar Council of India began their hectic parleys on Sunday by meeting several judges and the Chief Justice of India Dipak Misra to hammer out a solution into the unprecedented crisis created by the four senior most judges who revolted against the manner of CJI’s functioning.

Manan Kumar Mishra and Prabhakar told this newspaper that the judges were very receptive to the suggestion to resolve the issue and expressed the hope that the CJI would soon meet the top judges or convene a Full Court meeting to find ways and means to put an end to the imbroglio that has dent the image of the judiciary.

They said, “The Council does not think it proper to enter into such controversies on allotment of cases and it is for the Hon’ble Judges of Supreme Court and the Chief Justice of India to resolve such matters and find out a solution.  Indian Judiciary is the strongest pillar of our Constitution.  People have full faith in the system, but such steps (by rebel judges) may shake the faith of our people.”

Prabhakar said the Council was of the unanimous view that it is an internal matter of the Supreme Court.

The Council hope and trust that the Hon’ble Judges of Supreme Court would realize the seriousness of the issue and in future avoid any such situation of which the politicians or the political parties could take undue advantage and/or which could cause harm to our Judiciary.

They expressed a grave concern that cases are not being allocated in a proper manner and are being allocated arbitrarily to particular designated benches, often headed by junior judges, in an arbitrary manner. This is having a very deleterious effect on the administration of justice and the rule of law.

The letter said, “We agree with the four Judges that though the Chief Justice of India is the master of roster and can designate benches for allocation of work, this does not mean that it can be done in an arbitrary manner such that, sensitive and important cases are sent to hand-picked benches of junior judges by the Chief Justice. This issue needs to be resolved and clear rules and norms must be laid down for allocation of benches and distribution of cases, which are rational, fair and transparent. This must be done immediately to restore public confidence in the judiciary and in the Supreme Court.”

They suggested that all sensitive and important cases including pending ones, be dealt with by a Constitution Bench of the 5 senior most Judges of this Court.

Only such measures would assure the people that the Supreme Court is functioning in a fair and transparent manner and that the power of the Chief Justice as master of roster is not being misused to achieve a particular result in important and sensitive cases.

They urged Justice Misra to take immediate steps in this regard.

Senior Advocate Ashok Bhan in an open letter to the CJI Misra said that the administration of the Supreme Court is not in order and many things which are less than desirable have happened in the last few months.

The four Judges had said they wrote a letter to CJI and tried to persuade him to take redressal steps but failed.

These issues are at surface, what lies beneath are more serious questions and the attribution of more insidious motives, he said.

Bhan added, “the way out involves just not what but who. It has to be you alone as the Chief Justice who has to reach out to your brother and sister Judges as a first among equals to earn back their collective trust and confidence and carry all the judges together in discharge of their debt to perform their duties in accordance with constitutionalism and judicial discipline. Dithering to resolve the intra-Judges conflict and crisis of mutual confidence will cost the nation dear and; that would colossally shake the people's faith in the great institution of Supreme Court.”