CJI may meet rebel judges in bid to minimise damage 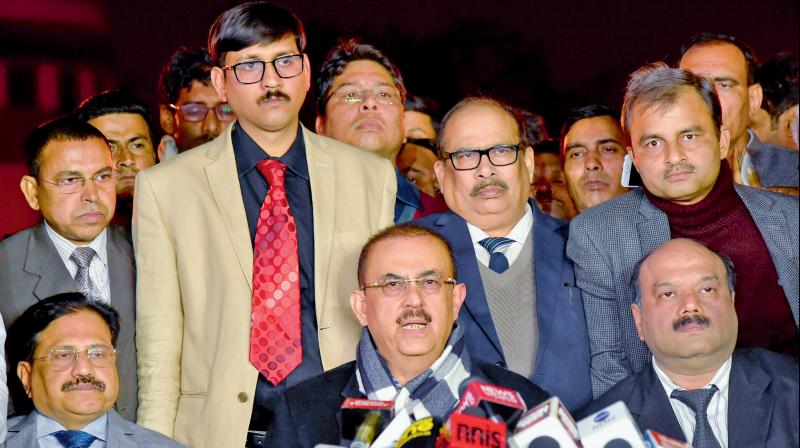 New Delhi: A day after four Supreme Court judges took the unprecedented step of airing their differences with Chief Justice Dipak Misra in public, the legal fraternity came together to control the damage and mend relations between the country’s five senior-most brother judges.

The Bar Council of India (BCI), a statutory body which regulates legal practice and legal education in India, formed a seven-member delegation which will meet the five judges and try to resolve the issue.

Amidst indications that CJI Misra may meet the four rebel judges — J. Chelameswar, Ranjan Gogoi, Madan B. Lokur and Kurian Joseph — on Sunday or Monday to settle the differences, BCI chairperson Manan Kumar Mishra told the media here, “We have unanimously decided to form a seven-member delegation of the council who will meet honourable judges of the Supreme Court. We want that the matter be solved at the earliest. We have got appointment from 23 judges. We want this matter to be solved earliest.”

Expressing anguish over the turn of events, Mr Mishra said, “We have given an opportunity to Congress president Rahul Gandhi and other political parties to comment on the judiciary. This is extremely dangerous. We request the political class to refrain from commenting on this issue. We do not want the judiciary’s image to be tarnished. People have unflinching faith in the judiciary.”

Talking about the differences between the CJI and the four judges on finalising the Memorandum of Procedure relating to judges’ appointment, Mr Mishra said, “MoP must be finalised at the earliest. Judges have been appointed through collegium. This is not an issue that must be taken to the public. We request the judges not to give an opportunity for such an incident to occur again.”

Together, the CJI and the four judges form the Supreme Court collegium, the highest decision-making body of the judiciary.

On Friday, the four top judges of the Supreme Court had held a press conference during which they questioned the conduct of the CJI, especially over the allocation of cases. The judges said they had failed to persuade CJI Misra that certain things are not in order, and left it to the people to protect the judiciary. They warned that democracy was under threat.

“We tried to persuade the CJI that certain things are not in order. Unfortunately, the efforts failed. We are convinced that unless corrective steps are taken immediately, the judiciary will lose its strong and independent tag, which is an essential hallmark of democracy,” they had said.

Talking separately on Saturday, Justice Kurian and Justice Gogoi asserted that there was no constitutional crisis in the apex court. Justice Kurian also stressed that the issues they had raised required no external intervention and would be resolved by the judiciary itself.

“This is not an issue that requires mediation from outside. This is an internal issue of the institution and the institution will sort it out. A correction inside the institution is what is required,” Justice Joseph said in Kochi, while maintaining that the four judges had acted solely in the interest of judiciary and justice.

Except Justice Chelameswar, the other three judges are out of station and are expected to return to the capital by Sunday evening. Their meeting with the CJI is, thus, likely on Monday. One of the four judges told this correspondent that “so far nothing has been told to any one of us”.

On Saturday morning, attorney general K.K. Venugopal told a television channel that by Monday morning litigants and lawyers would see unity among the Supreme Court judges as a solution would be found by then.

Meanwhile, on Saturday, TV visuals showing Prime Minister’s principal secretary Nripendra Misra turning up at the residence of the CJI led to speculation about the purpose of the meeting and sparked a political controversy.

Sources maintained that he had gone to meet the CJI to wish him for the New Year and the CJI shifting to the official residence in Krishna Memon Marg, but could not meet the CJI who was busy in his morning schedule.

The Congress, however, said Prime Minister Narendra Modi must answer as to why a “special messenger” was sent to meet the CJI. The TV visuals Nripendra Misra driving to the CJI’s official residence. However, the gates were not opened and after waiting for a while, the principal secretary to the PM was seen driving back.

The Supreme Court Bar Association (SCBA) also met on Saturday and expressed “grave concern” over the differences between the senior judges and CJI, while also taking note of concerns raised by the four senior judges.