India   All India  14 Jan 2018  Chidambaramsraided by ED in Delhi, Chennai
India, All India

Chidambaramsraided by ED in Delhi, Chennai 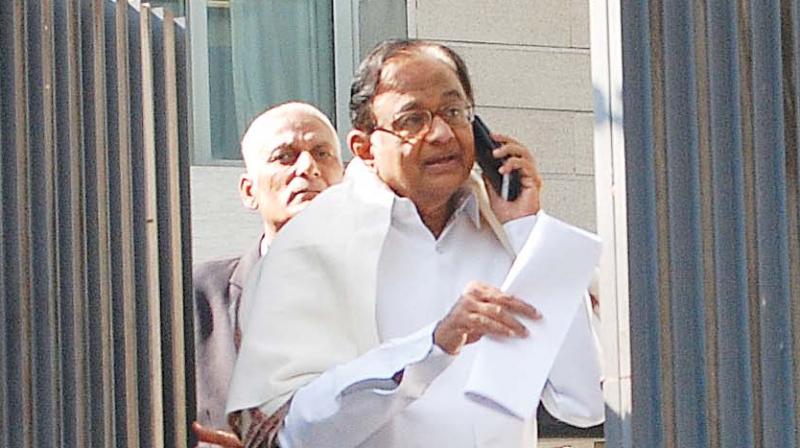 Chennai/Delhi: The Chennai and Delhi homes and official premises of former Union minister P. Chidambaram and his son Karti Chidambaram was raided by a team of Enforcement Directorate (ED) on Saturday.

The raids, in connection with the money laundering investigation in the Aircel-Maxis money laundering case against Karti Chidambaram, were termed as “a comedy of errors” by the former finance minister as the officers, he claimed, were “embarrassed” and “apologetic” as they could not find anything. Mr P. Chidambaram also questioned the agency’s jurisdiction to investigate the matter.

The former Union minister said the raids were a reaction to the notices sent out by the Supreme Court, which heard his son’s appeal on Friday. Karti Chidambaram, a 46-year-old businessman and Congress member, had questioned the cases filed against him.

The former minister said he anticipated his house in Chennai will be searched again, “but in a comedy of errors they came to Jor Bagh (in Delhi) and officers told me that they thought Karti is an occupant of this house, but he is not. I am the occupant”.

The officials, he added, went away with some papers, which was a copy of one of his speeches in Parliament.

The case against Karti Chidambaram is linked to criminal misconduct in the grant of the Foreign Investment Promotion Board (FIPB) approval.

Allegations have also been made by the ED about Karti disposing of a property in Gurgaon, rented out to a multinational company — for which FDI was granted.

“When Chidambaram had granted approval for the Aircel-Maxis case in 2006, he had to get an approval from the Cabinet Committee on Economic Affairs (CCEA) if the amount exceeds Rs 600 crore and this is over Rs 3,500 crore. However, approval was not sought from the CCEA,” the agency sources alleged.

The Congress Party on Saturday criticised the raids and accused the central government of “vicious vendetta being unleashed against Opposition leaders”.

The party’s communications chief Randeep Singh Surjewala said, “Stark truth is that Prime Minister and his government are using agencies like ED/CBI as captive puppets to settle political scores and intimidate political opponents. In fact, ‘Raid Raj’ has become the ‘DNA’ of Modi government.” The Congress, he said, will not be cowed down by these “attempts to browbeat or bulldoze”.

In Lucknow, SP chief Akhilesh Yadav claimed that the raids were meant to “divert the attention” of the people from the crisis in Supreme Court.

“The BJP men are best in diverting the attention of the people. The judges had raised a serious matter yesterday and today they (government) raided someone’s residence,” he said.