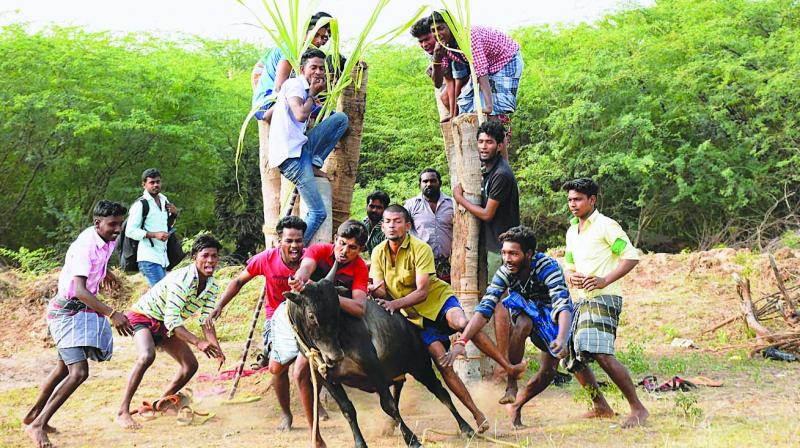 A group of people participate in Jallikattu at Karisalkulam village in Madurai on Friday despite ban on such events. (Photo: PTI)

Chennai: People, especially students, stepped out of their homes in hordes to march on the streets in several cities and towns on Friday demanding that jallikattu be allowed this year during Pongal festivities. Scores of villagers also defied the Supreme Court ban by holding bull taming sessions in open fields, although only on a small scale.

From a human chain on the Marina Beach to a motorcycle rally in Erode to a march by students in Vellore and a protest march in Dindigul — protests, demos and rallies rocked the state on Friday, just two days ahead of Maatu Pongal (Sunday) when jallikattu is usually scheduled. The protesters were not just demanding the conduct of jallikattu but also wanted a ban on Peta that has been vociferously opposing jallikattu and is the main petitioner in the case in Supreme Court.

As the people-driven protests gained momentum and reached a crescendo on Friday, DMK also took to the streets blaming the Central and state government for not bringing an ordinance to ensure conduct of the event.

Protests demanding ban on Peta and conduct of jallikattu were held in Vellore, Erode, Dindigul. Manamadurai, Tiruppur and Thiruvannamalai. In a scathing attack on Prime Minister Narendra Modi over the Jallikattu issue, the DMK charged that he had time to meet actors and others but not the AIADMK MPs who wanted to discuss about holding the banned bulltaming sport in Tamil Nadu during Pongal.

DMK working president and Opposition Leader M.K. Stalin, who pressed the Centre to immediately promulgate an ordinance to hold the sport and that AIADMK should also press Centre for it, said that “Tamils will not forgive” the two if such an urgent step was not taken.

Referring to the AIADMK MPs from the state petitioning Prime Minister on the issue on Wednesday, Mr Stalin asked if they could meet Modi.

“Whom does Mr Modi meet. Those known to him, including those from the cinema world, and immediately gives appointment to them. He has met actors including Salman Khan, Aamir Khan, Rajinikanth and Gautami. I am not criticising them, for they have their own pride. But, for Mr Modi who allots time for these actors, can’t he give time to AIADMK MPs to discuss an issue of heritage importance of Tamils,” he said.

Mr Stalin, who led DMK’s state-wide protests from here demanding Jallikattu be held this year, also questioned why Modi could not meet the MPs a different date if he unable to meet them earlier.

Hitting out at the ruling AIADMK, he said chief minister O. Panneerslevam should have left to Delhi from Hyderabad yesterday, where he had gone for talks over the Krishna water-sharing with his Andhra counterpart N. Chandrababu Naidu, after the Supreme Court declined to pass an order on Jallikattu.