India   All India  13 Dec 2021  Varanasi decked up for inauguration of Kashi Vishwanath Corridor by PM Modi
India, All India 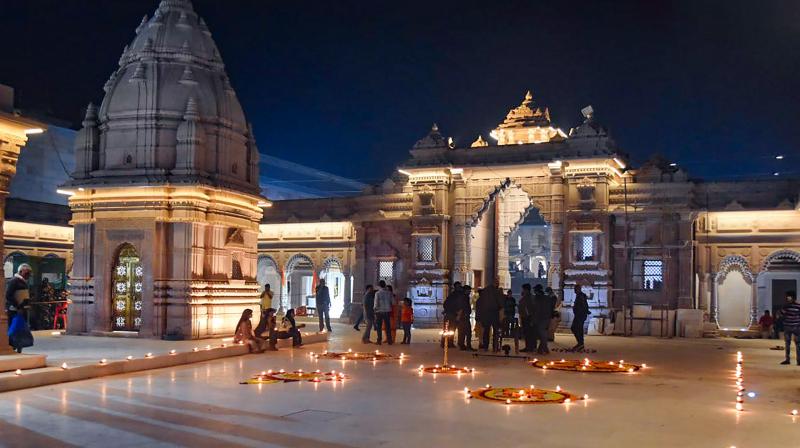 Kashi Vishwanath Dham decorated with 'diyas' ahead of its inauguration by Prime Minister Narendra Modi, in Varanasi. (PTI)

Varanasi: From massive murals depicting art and cultural heritage of Benares to illumination of several buildings near the Kashi Vishwanath temple site, Varanasi is all decked up to welcome Prime Minister Narendra Modi, who is slated to arrive here on Monday to take part in a host of events.

The main event will be the inauguration of the phase one of the Kashi Vishwanath Dham constructed at a cost of around Rs 339 crore.

PM Modi will dedicate to people the ambitious Kashi Vishwanath Corridor in the heart of Varanasi after offering prayers at the ancient temple that draws massive number of visitors from India and abroad.

Even till late evening on Sunday, construction workers were busy polishing stones, labourers were occupied decking up the temple premises with flowers, especially marigold, and staff rushing things up at Lalita Ghat to make it ready for the function.

There is a palpable excitement among a majority of the residents of the temple town and domestic tourists flocking the holy shrine of the Hindus in the run-up to the high-profile event, in view of which the police security in Varanasi has been stepped up.

Excitement of the inauguration event, branded as Divya Kashi, Bhavya Kashi', is such that a Shiv Barat procession was taken out in the streets near Godowlia Chowk, while owners of many hotels in the area have lit up their properties, with one saying, "It is a historic moment for Kashi and we are fortunate to be part of it".

At the temple site, workers and Shri Kashi Vishwanath Temple Trust employees were also eagerly waiting for the day.

Many were seen taking pictures against the backdrop of the old temple or the four new gateways which have been constructed using traditional craftsmanship. Anil Keshri, a readymade garment seller, whose shop is at Godowlia Chowk, was brimming with excitement, watching the festooned streets and lit-up buildings.

"Banares is a heart of culture, cradle of civilisation and 'Kashi Vishwanath ki Nagari'. Look at the beautiful decoration, I am very happy and the new corridor will surely bring more tourism and greater glory for my city, and for India," he said, as he pointed to a shobha yatra poster hung at the famous street intersection.

Near the Varanasi airport in Babatpur, walls of a flyover near it have been decorated with artists murals, portraying the Ganga 'aarti', Kashi Vishwanath temple, ghats of Benares and other heritage of the city, which is the parliamentary constituency of Modi since 2014.

Shrikant Mishra, the main priest of temple, said, "The coming up of the new corridor is a miraculous moment. Nothing happens in this city without Kashi Vishwanath baba's permission. It's His city. Creation, destruction, recreation, all His will.

A total of 23 buildings will be inaugurated in the phase one of the project, the Prime Minister's Office said in a statement.

These will provide a variety of facilities to pilgrims, including suvidha kendras, tourist facilitation centre, vedic kendra, mumukshu bhavan, bhogshala, city museum, viewing gallery and food court among others.

The scale of the project was such it is now spread over a massive area of about five lakh square feet, whereas earlier premises were limited to just around 3,000 square feet.

Despite the Covid pandemic, the work on the project has been completed on schedule, the PMO said.

Posters have been put up on ornate lampposts in streets near the iconic temple--one of the 12 Jyotirlingas-- hailing Modi for "realising the vision of this project".

The current structure of the temple was constructed by Maharani Ahilyabai Holkar around 1780 and in the 19th century, Maharaja Ranjit Singh had got it crowned with a golden shikhar.