India   All India  13 Dec 2021  For every Aurangzeb, India has always produced a Shivaji: PM Modi
India, All India

For every Aurangzeb, India has always produced a Shivaji: PM Modi 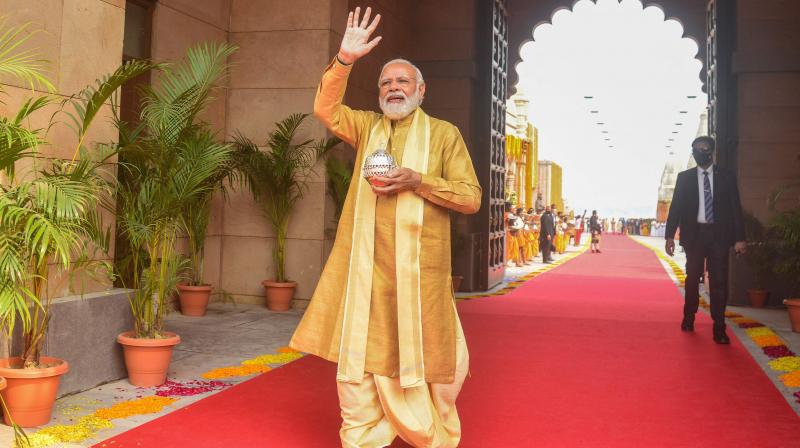 New Delhi/Varanasi: Hailing Kashi (Varanasi) as “anant” (endless) and “imperishable,” Prime Minister Narendra Modi on Monday inaugurated the first phase of the Kashi Vishwanath Project in his parliamentary constituency, with the famous Vishwanath Temple getting a grand new complex, connecting it directly with the Ganga. Noting how attempts were made by Mughal emperor Aurangzeb to demolish the temple city and crush India’s traditions by force, Mr Modi said at such times rulers like Chhattrapati Shivaji Maharaj rose to challenge him, drawing thunderous applause from the gathering. The inauguration of the first phase of the project has come just months ahead of the crucial Assembly polls in Uttar Pradesh.

Describing the Kashi Vishwanath Dham as a symbol of India’s “sanatan culture, spiritual soul, antiquity, traditions and strength,” Mr Modi said India was proud of its culture and knows how to balance its “virasat” and “vikas”.  He said the inauguration of the complex was a “new chapter” in the history of Kashi Vishwanath and the city has stood the test of time. Like the temple city, which was “anant”, its contribution to the nation’s development was also endless. He urged the nation to take three pledges for the country -- cleanliness, creativity, and a constant effort for a self-reliant India. The PM went on a Ganga river cruise in the evening, accompanied by BJP president J.P. Nadda and the chief ministers of BJP-ruled states, including UP’s Yogi Adityanath, Madhya Pradesh’s Shivraj Singh Chouhan and Haryana’s Manohar Lal Khattar, from where they had a panoramic view of the Ganga aarti. Mr Modi will also attend a conclave of the BJP’s chief ministers on Tuesday.

The temple complex surrounding the Kashi Vishwanath Temple, which was earlier only 3,000 square feet, now covers about five lakh square feet and will be directly connected to the Ganga. Noting how the city had seen destruction in the past, Mr Modi hailed the contribution of Maratha queen Ahilya Bai Holkar in the reconstruction of the temple and also of Punjab’s Maharaja Ranjit Singh, who donated gold plates for the domes. He also mentioned how saints, icons and scholars like Jagadguru Shankaracharya, Samath Guru Ramdas Goswami Tulsidas, Kabir, Chaitanya Mahaprabhu, Chhattrapati Shivaji Maharaj to Rani Laxmibai, Madan Mohan Malviya, Bhartendu Harishchandra, Munshi Premchand and Bismillah Khan have links to the temple city.

A total of 23 buildings have been inaugurated in the first phase of the Kashi Vishwanath project that offers myriad facilities to visitors -- Yatri Suvidha Kendras, Tourist Facilitation Centre, Vedic Kendra, Mumukshu Bhavan, Bhogshala, City Museum, Viewing Gallery, Food Court, among others. More than 40 ancient temples which were rediscovered were restored and beautified.

Around 3,000 priests from across the country along with UP CM Yogi Adityanath, deputy chief ministers Keshav Prasad Maurya and Dinesh Sharma, UP governor Anandiben Patel, BJP president J.P. Nadda and others attended the ceremony.

“Extremists have invaded this city… they tried to demolish it… History is witness to the atrocities of Aurangzeb, who tried to change civilisation by the sword and destroy traditions through fanaticism… but the soil of this country is different from the rest of the world… If Aurangzeb comes here, then Shivaji also rises… If Salar Masud marches, then greats like Raja Suheldev show him the strength of our unity,” the PM said.

Lauding the civilisational heritage of Varanasi, Mr Modi said that many sultanates rose and collapsed, but Kashi still remained. “God is the only sarkar (government) in Kashi… only the one who holds the damru rules. The new complex reflects our history, culture… where the old and the new co-exist. I thank Yogi Adiyanath and the artisans who had worked tirelessly to finish the corridor despite the pandemic,” Mr Modi said.

After arriving in the holy city, Mr Modi first paid obeisance at the Kaal Bhairav Temple and then took a dip in the river Ganga from where he collected holy water for worship at the Kashi Vishwanath Temple. People chanted hymns as the PM’s convoy rolled through the city. The PM also stopped at some places to accept felicitations. Before taking a dip, the PM boarded the Swami Vivekanand Cruise at the Ravidas Ghat. Before the inauguration, Mr Modi had attended a prayer ceremony at the Vishwanath Temple and later showered workers involved in building the project with flower petals in a gesture to acknowledge their work. He also sat with them for a group photograph.

The foundation stone of the Kashi Vishwanath Dham Project was laid by the Prime Minister in 2019 and Mr Modi himself has been actively involved in it. The project included the purchase and acquisition of more than 300 properties around the temple.