The Chief Minister submitted a memorandum to PM Modi on the huge loss incurred by Telangana, in particular Hyderabad due to floods 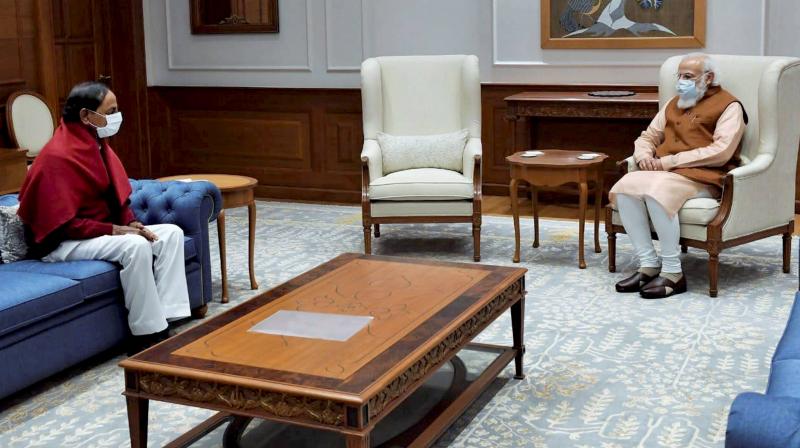 Hyderabad: Chief Minister K. Chandrasekhar Rao on Saturday called on Prime Minister Narendra Modi at the latter's residence in New Delhi, with the two spending around 30 minutes together.

Highly placed sources in the TRS government said that during his meeting, Rao requested Modi for release of assistance from the Centre to state as flood relief. The Chief Minister submitted a memorandum to the Prime Minister on the huge loss incurred by Telangana state, in particular Hyderabad, due to recent heavy rains and floods.

Further, the TRS chief also requested the Prime Minister to implement promises made by the Centre in Parliament to the during passage of the AP Reorganisation Act. Rao also sought from the PM GST arrears that the Centre is due to the state, sources added.

Rao meeting Modi after one long year is quite significant in the backdrop of the TRS chief announcing that he will play an active role in national politics. Rao has gone on to assert that he wants to develop an alternative political force against the ruling BJP at the Centre.

The Chief Minister is in the national capital on a three-day official visit. He has already met home minister Amit Shah, Jal Shakti minister Gajendra Singh Shekhawat, apart from aviation, housing and urban affairs minister Hardeep Singh Puri. He is expected to meet other central ministers, including finance minister Nirmala Sitharaman, on Sunday.

Sources in the TRS revealed that Rao and Modi also discussed national politics and elections to the Greater Hyderabad Municipal Corporation and Dubbak by-election, wherein BJP has made impressive gains in the former and won the latter.

Incidentally, after the meeting, the PMO went on to tweet, “Telangana CM K. Chandrasekhar Rao has called on PM @naredramodi today”.