India   All India  13 Dec 2016  No culling, MP’s fight against nilgai menace gets an African makeover
India, All India

No culling, MP’s fight against nilgai menace gets an African makeover 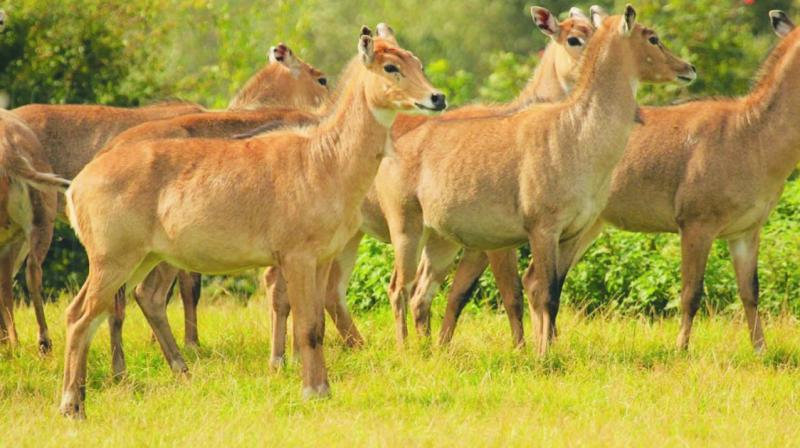 33,500 nilgais in MP. Govt spends !2 crore a year to compensate for crops damaged by them.

Deafening sounds of rhythmically pounded hoofs of galloping horses, shrieks of jockeys and roars of drum-beating aborigines, a scene resembling hallmark cowboy movies of Hollywood, surcharge the atmosphere in this sleepy village under Mandsaur district as foresters practice to perfect the art of African technique “boma” (isolate and capture) to end menace of nilgai or Indian blue bull, declared by the Union government as vermin.

Around 50 ‘tamers’, forest officers trained in ‘boma’ technique, mounted on horses advanced towards a herd of animals menacingly by letting out queer sounds to scare them to walk into a trap, an enclosure, laid a km away as the demonstration exercise to capture the vermin got underway on the village outskirt on Monday.

“We are fine tuning ‘boma’, the African technique of isolating and capturing the wild animals to suit it to our conditions. In Africa, wild animals which stray into human habitations in large numbers are being chased away into forests by low-flying helicopters”, a forest officer supervising the operation told this newspaper on Monday.

“This is the first such experiment in the country. Our home-honed ‘boma’, if successfully implemented, will show a way to the country to end the nilgai menace without going for the option of culling the species, which created a dilemma among the Hindu farmers for the animal being tagged with ‘gai’ (cow) in its name, besides inviting ire of animal rights activists”, the forest officer said.

“We plan to capture around 50 nilgais, inhabiting in Ira village, and release them in Satpura Tiger Reserve by applying ‘boma’ technique, on trial basis, tentatively on December 15. We will then shift our operation to other areas affected by the stomping vermin in a phased manner to free the whole state of the problem”, Principal Chief Conservator of Forest (PCCF) (wildlife) of MP, Jatindra Agrawal told this newspaper.

The ‘desi’ version of ‘boma’ is very cumbersome, as being experimented in Ira village.

According to him, a one km-long funnel type enclosure facilitating movement of nilgais in it, is being built to lay a trap for the vermin. The wild animals will be chased inside the massive enclosure to make them walk into a carriage, put at the end.  They will then be released in Satpura tiger reserve, where they will find their predators in big cats to restrain their population.

Nilgai, the largest antelope species in Asia, has an estimated population of 33,500 spread over 20 districts in MP.

The forest department has planned to relocate all these wild animals in various tiger reserves in the state to control their population.