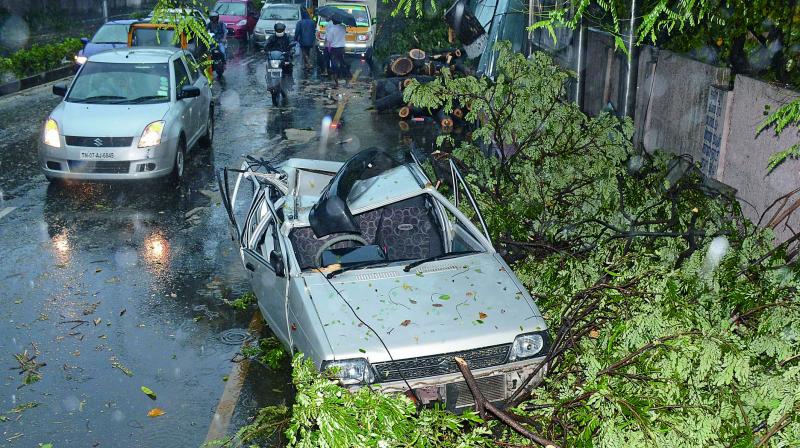 A car is wrecked by a falling tree in Chennai on Monday as cyclone Vardah hit the city. (Photo: Asian Age)

Seven deaths were reported from Chennai, while one person each died in Kancheepuram and Nagapattinam, officials said fearing that the death toll could increase even as nearly 10,000 people living in low-lying areas were moved to safety by authorities. A Union home ministry spokesperson said in Delhi that four people were killed in the storm in Tamil Nadu.

Chennai, Tiruvallur and Kancheepuram districts plunged into darkness as Tamil Nadu’s capital resembled a ghost town on Monday, bringing back the scary memories of last year’s devastating floods that claimed around 300 lives. This is the most intense cyclonic storm to have hit Chennai in two decades.

Windspeed touched 150 kmph as the cyclone made its landfall near Chennai’s harbour on Monday evening, leaving a trail of destruction and devastation from Sriharikota in Andhra Pradesh to Mamallapuram in Tamil Nadu, a distance of 174 km. In Andhra Pradesh, over 9,400 people living along the Bay of Bengal were evacuated to relief camps amid heavy rain.

The only domestic and international airport in Chennai shut operations from 11 am on Monday evening, and the runway was not opened for flight traffic till reports last came in. Suburban trains were cancelled due to gusty winds, and buses went off roads for most part of the day.  The National Highways connecting Chennai with Bangalore, Kolkata, New Delhi and Mumbai suffered severe damages as powerful winds uprooted trees and signboards affecting traffic. 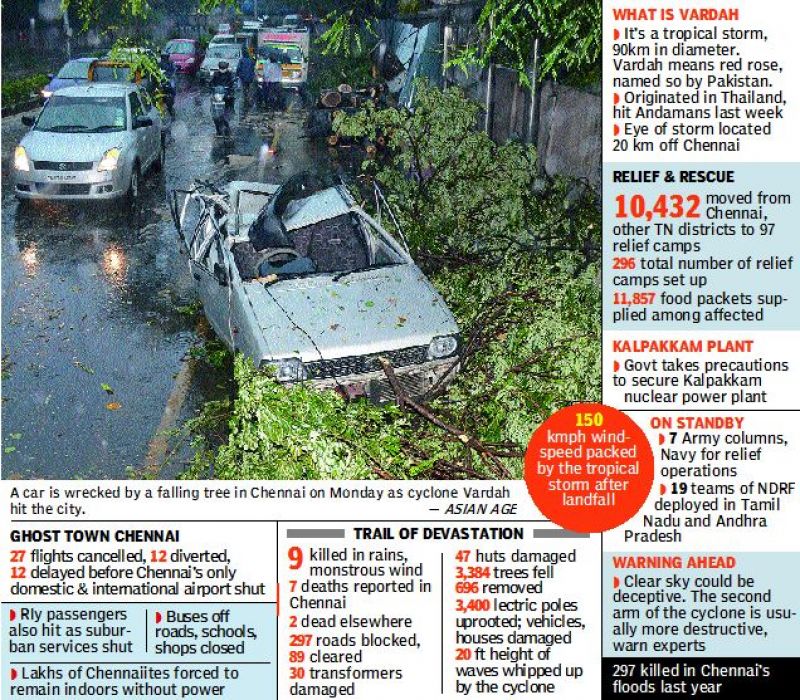 “Vardah hit Chennai’s coast at 2.30 pm and made its landfall near the harbour at 6.30 pm. The maximum windspeed was 150 kmph at one point. After 1994, this is the first very severe cyclonic storm to hit Chennai’s coast. It has completely crossed the coast as expected,” a senior MeT department official said.

The Army rushed its personnel to Pulicat and Puzhal in Tiruvallur district, the worst affected by the cyclonic storm, to immediately begin relief operations.

Union home minister Rajnath Singh spoke to the CMs of Tamil Nadu and Andhra Pradesh to take stock of the situation and promised all help.

Tamil Nadu CM O Panneerselvam and his Andhra Pradesh counterpart N. Chandrababu Nadu apprised the home minister of the damage caused by the cyclone and steps taken for rescue and relief.

Tamil Nadu chief minister O Pannerselvam said late on Monday night that restoration of electricity would begin midnight and complete restoration of power supply to all three districts would take one or two days. He also announced ex gratia of Rs 4 lakh each to the kin of those who died in the cyclone.