The Vardah velocity was the worst aspect of the storm as it uprooted trees and electricity posts. 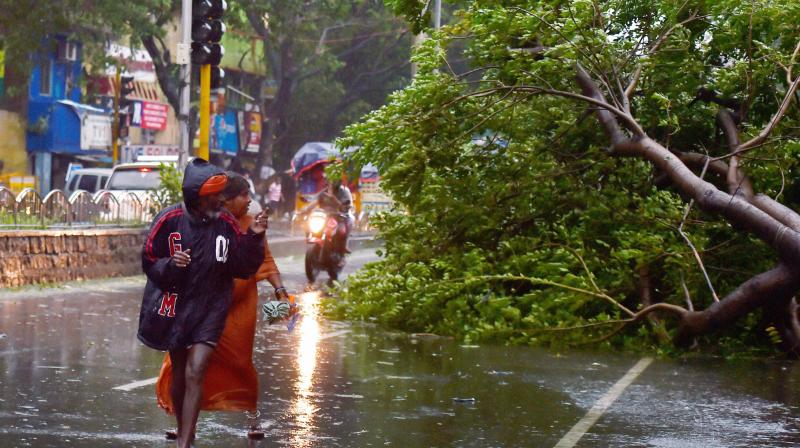 People looking at an uprooted tree during a heavy storm caused by Cyclone Vardah in Chennai on Monday. (Photo: PTI)

Chennai: The spirit of Chennai lives on. The resilience of its citizens once again shone through on another disastrous day. Barely a week had passed since the death of the former Chief Minister J. Jayalalithaa before another event came through to challenge the city. The peaceful farewell given to her was a feather in the cap of the city last Tuesday and this Monday Vardah took centre stage.

It appears the city is yet to get out of the throes of its December Syndrome. The tsunami (2004), Cyclone Thane (2011), floods (2015), Jaya’s death (2016) and Vardah blowing through on Monday were all events that took place in the month of December. If December 1 and 2, 2015 were the worst days in living memory as 50 cms of rain fell from the mother of all storms to flood the entire city as dams overflowed and rivers breached, December 12 will go down as another day of a natural calamity the city won’t forget in a hurry.

The Vardah velocity was the worst aspect of the storm as it uprooted trees and electricity posts. And yet even as winds exceeding 180 kmph were blowing across the city, the civic staff and police patrols were up and about checking what they could do to help people in distress. While many of them went beyond their normal call of duty in grappling with problems on the roads, it was the volunteers who took the breath away.

Coming out on to the streets courageously in batches, these public-spirited people pulled out branches of trees that were obstructing the passage of vehicles. Although only those who needed to be out in such weather were driving or riding on the roads, it was up to the volunteers to keep even those people moving by making passages for them through the clutter of trees, leaves and debris the storm had kicked up and left in its path.

Not only did the volunteers clear the main roads of trees to help people commute, they also controlled the traffic flow as on most roads only one part was motorable. Volunteers spanned out to monitor the one-way traffic, stopping vehicle movement on one side of the road to ensure there were no snarls and then alternated the flow to make it smoother than even on normal days.

Using their Whatsapp groups to good effect, the civic staff monitored reports of fallen trees to rush its staff as well as Bobcats and other tree-moving equipment to help clear the main roads. The police used their own Whatsapp group to keep track of any emergencies. Ambulances were seen rushing through the city in abnormal numbers and they were able to make good progress as a path was cleared on all arterial roads to keep the vehicles moving. By the end of the day as the storm’s tail wind blew through the city, its spirit had prevailed.