Will decide on giving tickets to disqualified MLAs to contest Karnataka bypolls: BJP

The SC passed a verdict on Nov 13 where it allows the rebel MLAs to contest upcoming bypolls in K'taka. 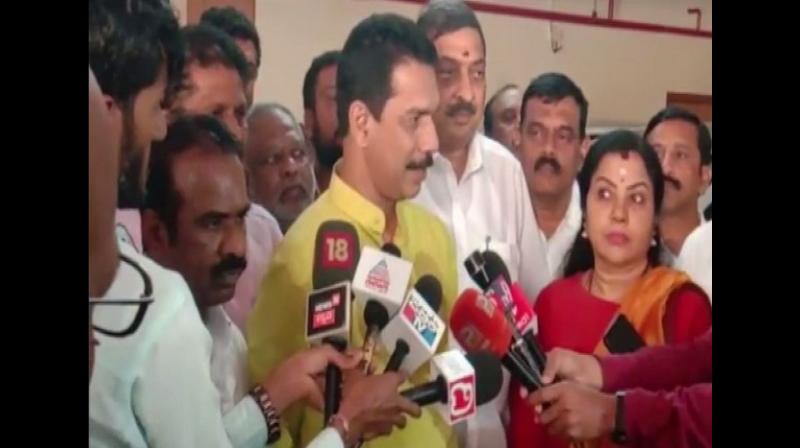 BJP state president Nalin Kumar Kateel said, 'We will also hold discussions on allocating tickets to the disqualified MLAs with the Chief Minister and also with the Core Committee during the meeting which will be held today. The decision will be taken after the meeting.' (Photo: ANI)

Bengaluru: BJP state president Nalin Kumar Kateel welcomed the Supreme Court verdict, allowing disqualified Karnataka MLAs to contest the upcoming polls and said its leadership would take a call on the issue of giving them tickets to contest next month's bypolls.

Speaking to media, he said, "Today, the Supreme Court has permitted the disqualified MLAs to contest the by-polls. I welcome the judgment. Elections dates are already announced and now we will discuss with our senior leaders of the party about the future preparations."

"We will also hold discussions on allocating tickets to the disqualified MLAs with the Chief Minister and also with the Core Committee during the meeting which will be held today. The decision will be taken after the meeting," he added.

The elections for 15 out of 17 seats are slated to be held on December 5. The poll body had withheld the elections for two seats -- Maski and Rajarajeshwari -- as the petitions against these Assembly constituencies are pending in the Karnataka High Court.

The Supreme Court on Wednesday upheld the decision of the then Karnataka speaker K R Ramesh Kumar to disqualify 17 rebel Congress-JD(S) MLAs under the anti-defection law but said that they can contest the upcoming by-elections in the state.

The rebel legislators were disqualified by the then speaker in July under the anti-defection law after they tendered their resignation.

They were also barred from contesting polls for the duration of the current assembly, which is slated to end in 2023.

The move had led to the falling of the Congress-JD (S) coalition government, paving way for BJP to stake claim to form a new government in the state.