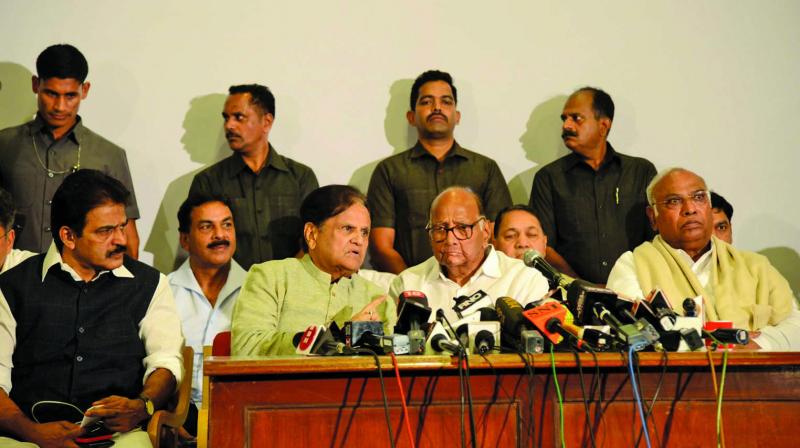 Mumbai: Like the Shiv Sena, the NCP, too, could not prove the required numbers for government formation within the period stipulated by governor Bhagat Singh Koshyari.

After the party sought three more days to inform its decision, the governor recommended the Union government to impose President’s rule in the state.

After Mr Koshyari gave the NCP a deadline of 8.30 pm Tuesday to prove the required numbers to form the government, the Sharad Pawar-led party went into a huddle.

By afternoon, however, it became clear that the party could not get the necessary support and it informed the governor accordingly.

A senior NCP leader familiar with the development, requesting anonymity, said that his party sought three days from the governor to garner support letters from the Congress and Shiv Sena.

“A letter had been sent to the governor’s office around 12 noon, seeking time from the governor,” he said.

The NCP also blamed the Shiv Sena for lack of coordination in its government formation efforts. According to a senior NCP leader, the Sena failed to coordinate properly with the Congress and NCP while negotiating.

“The Sena will need to give more clarity on its government agenda. What will the party offer to the Congress-NCP i.e. portfolios. Besides, the Sena needs to give a proper proposal for negotiating with us,” he said.

According to a communiqué from Raj Bhavan, “Governor Bharat Singh Koshyari, having been satisfied that as the government the state of Maharashtra cannot be carried on in accordance with the Constitution, has, Tuesday, submitted a report as contemplated by the provisions of Article 356 of the Constitution."

Meanwhile, the Congress slammed the governor’s decision to impose President’s rule in the state.

In a tweet, Congress spokesperson and general secretary Sachin Sawant said, “President’s rule is strongly condemned. If no clear majority, after exploring all possibilities to form government, the governor can resort to Article 356 as the last resort- (1997) 29 ALR 159 (FB– Allahabad HC). He may exercise his discretion but in a judicious manner, beyond political lines (sic).”

However, political experts said that with the governor recommending President's rule in the state, the NCP seemed to have lost the plot.

After being asked to show willingness to form the government, party chief Sharad Pawar had the chance to play his cards. But his plans were swiftly thwarted by the Bharatiya Janata Party, which acted promptly to impose President's rule in the state, said a political observer.