India   All India  13 Nov 2019  BJP workers protest in Kolkata against Mamata Govt over spurt in dengue cases
India, All India

A couple of agitated protesters also tried to break and jump the barricades at the protest site in Central Kolkata. 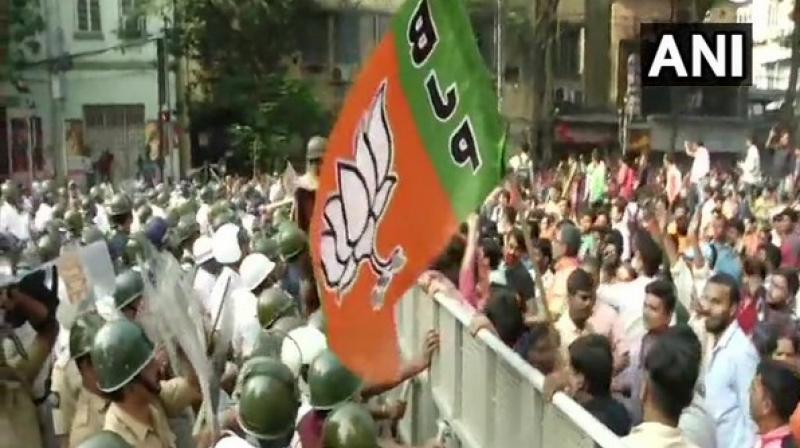 Kolkata: The Bharatiya Janata Party took out a massive protest in Kolkata against Mamata Banerjee government over rising cases of dengue in the city.

Accusing the Trinamool Congress government of not doing enough to curb the menace of Dengue and improve healthcare in the region, BJP workers plan to gherao Kolkata Municipal Corporation to mark their protest.

"From the past four years, the number of people affected by dengue across the state has increased. We will fight for the common man. Mamata Banerjee has done nothing to curb it. We will not sit quiet," a protesting BJP worker said.

A couple of agitated protesters also tried to break and jump the barricades at the protest site in Central Kolkata. Some of them were also heard sloganeering "Jai Shri Ram".

Police authorities used water cannons to disperse the BJP workers who protested against the civic body.

He also told ANI that soon they will try to do Kolkata Municipal Corporation gherao to mark their protest.

BJP leader Rimjhim Mitra also spoke to ANI on the matter and said, "We had prior permission to hold a protest and the protest was peaceful. Male police personnel manhandled us."

To disperse the crowd, the local police used water cannons to bring back normalcy in the state.

According to the World Health Organisation, the incidence of dengue has increased 30-fold over the last 50 years.

Up to 50-100 million infections are now estimated to occur annually in over 100 endemic countries, putting almost half of the world's population at risk.