India   All India  13 Nov 2019  Behind Delhi’s deadly air, it is not only stubble but also what we don’t need
India, All India

Behind Delhi’s deadly air, it is not only stubble but also what we don’t need

As of October 31, the crop burning contributed 44 per cent to Delhi’s PM2.5 level. 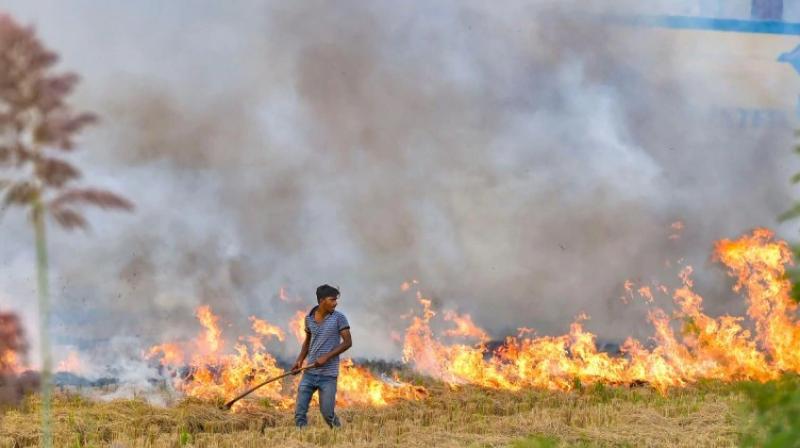 Since farmers don’t have enough time or money to store the straw, they found the fastest and cheapest solution -- burning it. (Photo: PTI)

New Delhi: Our country is producing more rice than it requires because of Punjab state government subsidies and guaranteed prices.

That could have been good news if not for the attendant evil of burning stubble of the harvested crop that has triggered the worst pollution in north India in recent times.

Former Agriculture Secretary Siraj Hussain told the Bloomberg: “Farmers in Punjab and Haryana need to diversify from rice to other crops to save water and the environment.”

The government should help them shift to crops that use less water, like soyabeans, pulses and corn, compensating them for any loss in earnings ‘for two or three years’, said Hussain, a visiting senior fellow at the Indian Council for Research on International Economic Relations in New Delhi.

So, India is producing an excess of grain that is (a) contributing to air pollution, (b) is water-extensive and (c) is unnecessary.

Moreover, with an intention to save water, a law was enacted in 2009 that barred farmers in Punjab from sowing rice until mid-June, i.e on the advent of monsoon.

However, this left farmers with very little time to clear the fields and sow wheat before the winter.

To cope with the issue while adhering with the law -- Preservation of Subsoil Water Act -- farmers started to burn rice stubble to clear and sanitize the soil for the next crop.

Despite the government’s failure in understanding the implication of these subsidies, that is doing more harm than good, farmers are being blamed for the capital’s terrible air quality.

“Everyone blames farmers for the pollution,” said Harjinder Singh, 40, who grows rice and wheat on 4 acres he rents in the village of Sher Majra in Punjab state. “What about the factories that emit poisonous gases all year round?” he asked, indicating a plant next to his field that turns plastic waste into furnace oil.

As of October 31, the crop burning contributed 44 per cent to Delhi’s PM2.5 level, a measure of dangerous particles in the air.

Earlier, straw was removed manually during the harvest period and was given to cattle as fodder. Now, farmers mostly use a combine harvester which leaves up to 80 per cent of the residue in the field. Since farmers don’t have enough time or money to store the straw, they found the fastest and cheapest solution -- burning it.

“Farming is no longer profitable and the government doesn’t understand that,” said Singh, adding that farmers should get an additional Rs 200 per 100 kilograms of rice to pluck and store the straw instead of burning it.

India has seven of the 10 most polluted cities in the world, and air pollution was responsible for one in eight deaths in 2017.