Several BJP leaders and hundreds of party workers paid their last respects to the departed leader at the party office. 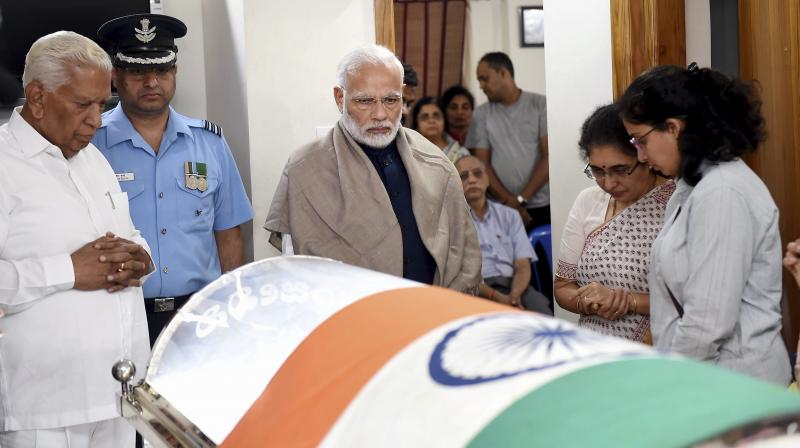 Prime Minister Narendra Modi visited Ananth Kumar's residence at Basavanagudi and paid homage to his colleague by placing a wreath on his mortal remains on Monday night. (Photo: PTI)

Bengaluru: A stream of leaders and supporters on Tuesday paid their last respects to Union Parliamentary Affairs Minister and senior BJP leader Ananth Kumar, who passed away on Monday.

The body was taken from his Basavanagudi residence, where it was kept since Monday morning to Jagannath Bhavan, the BJP state headquarters at Malleshwarm, in a decorated military vehicle with personnel of the three services- the Army, Navy and Air Force- accompanying it. The procession began, with supporters chanting slogans "Bharat Mata Ki Jai", "Ananth Kumar Amar Rahe".

State BJP president B S Yeddyurappa and party's General Secretary in-charge of Karnataka Muralidhar Rao were present at the state BJP office, where a pall of gloom has descended.

Several BJP leaders including Union Minister Sadananada Gowda, R Ashoka, K S Eshwarappa, Anurag Thakur, Pralhad Joshi, and hundreds of party workers paid their last respects to the departed leader at the party office, where the body will be kept for about an hour.

Kumar's mortal remains will then be shifted to the National College Ground, which falls in his constituency, for the public to pay homage, before the funeral at Chamarajapet crematorium in the afternoon.

The central government has announced a state funeral for Kumar. According to sources close to the family, Kumar's brother Nanda Kumar will perform the last rites according to Brahmin traditions.

The 59-year-old Bangalore South MP breathed his last around 2 am on Monday at the Sri Shankara Cancer Hospital and Research Centre where he was under care after returning home in October following treatment in the US and Britain.

Prime Minister Narendra Modi flew in here from Varanasi and drove straight to the residence of Kumar at Basavanagudi and paid homage to his colleague by placing a wreath on his mortal remains, on Monday night.

BJP leaders and those from various political parties, relatives, family friends, party workers and people made a beeline at Kumar's residence to pay homage to the "most-loved" Bengaluru MP, known for his affability and cordial ties with rivals.

The Karnataka government had declared a three-day state mourning. Foraying into politics in 1987, Kumar became Union minister in the Vajpayee cabinet in 1998 when he was only 38. He remained in the inner circle of the central leadership of the BJP -- be it during the heyday of Atal Bihari Vajpayee or Narendra Modi now. He served as an important link between the central and state units of the party.

Teaming up with Yeddyurappa, Kumar was among the few party leaders who could be credited for the growth of the BJP in Karnataka, bringing it to power in 2008 and making it the first saffron party government in the South.

Kumar made his parliamentary debut in 1996 from Bangalore South, where he remained unconquered till his death. He had defeated software icon Congress's Nandan Nilekani in the highly politically conscious constituency in the 2014 Lok Sabha polls.