India   All India  13 Nov 2018  Modi doesn't know that country is run by people, not by single man: Rahul Gandhi
India, All India

Modi doesn't know that country is run by people, not by single man: Rahul Gandhi

Gandhi said as per Modi, development of the country began only after 2014, when he became the prime minister. 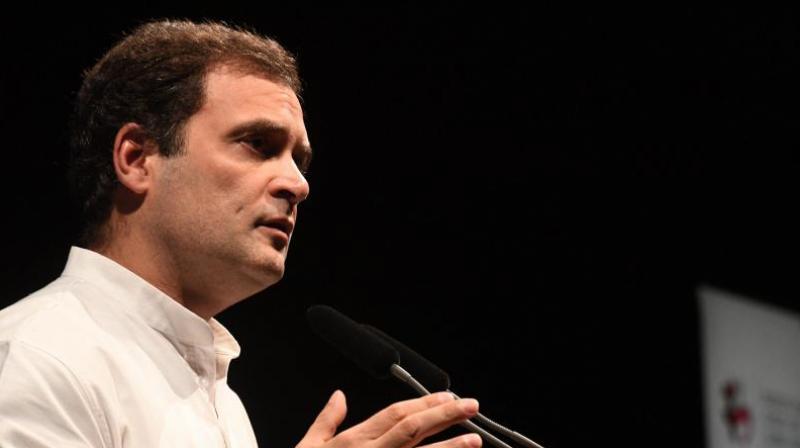 Demonetisation and implementation of the Goods and Services Tax (GST) was aimed to break the back of small and medium businesses, Gandhi said. (Photo: File)

Addressing a rally here ahead of the second phase of polling in the state on November 20, Gandhi said as per Modi, development of the country began only after 2014, when he became the prime minister. "He (Modi) doesn't even know that the country is run by the people and not by a single man. He insults you by making such comments," the Congress president said.

Demonetisation and implementation of the Goods and Services Tax (GST) was aimed to break the back of small and medium businesses, Gandhi said. Congress will encourage youth to do business and get loan facility from banks, he added.

The Congress is not against big industrialists, but if government gives them benefit, small and medium business should not be neglected, he said.

"Nirav Modi, Mehul Choksi, Vijay Mallya fled the country with thousands of crores of rupees belonging to the people of India. PM Modi does nothing to bring them back to the country and doesn't utter a word on the issue," he said.

He claimed the CBI director was removed from his post at 1 am to stop a probe into the Rafale deal.

"If there is an investigation, only two names will come up: Narendra Modi and Anil Ambani. Modi is scared of a probe," he said. Gandhi claimed Anil Ambani was chosen over HAL for the Rafale deal despite HAL having 70 years experience in manufacturing fighter aircraft. "Anil Ambani didn't have the experience. He may not have made even a paper aeroplane," he said.

Chhattisgarh is rich in resources, the Congress president said, adding the "dream of the state was broken due to the misrule" of the BJP government.

Promising a "people's government" in Chhattisgarh if voted to power, he said people want a government which listens to their "Mann ki Baat". "Instead of working for a few industrialists, Congress will work for development of agriculture, education and health in the state," Gandhi said.