Is BJP 'dangerous'? Rajini says if Oppn thinks so, must be like that

On demonetisation, Rajinikanth said: 'the implementation was flawed. It is a matter that should be discussed in detail.' 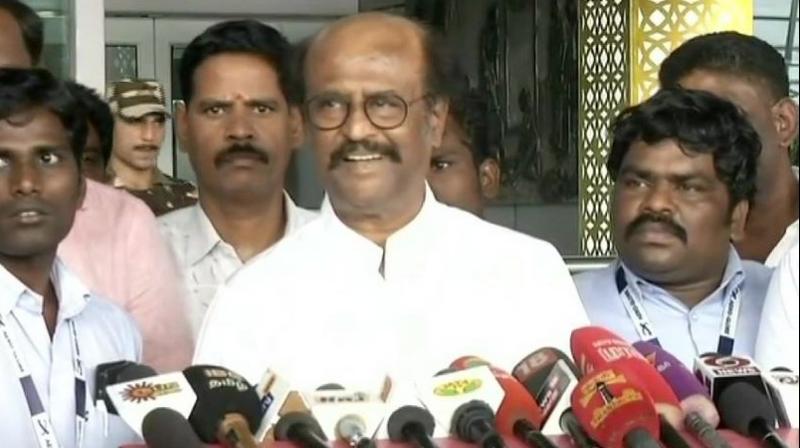 On the rising incidence of rape and murder of girls in Tamil Nadu, Rajinikanth said tougher laws and stricter implementation was the way out. (Photo: Twitter | ANI)

Chennai: Top actor Rajinikanth, who is expected to foray into politics, said on Monday that the implementation of the demonetisation exercise by the Centre was flawed.

The Tamil superstar, when asked about his view on the impact of demonetisation vis-a-vis its second anniversary, told reporters that "the implementation was flawed. It is a matter that should be discussed in detail."

Asked if the BJP was such a 'dangerous' (electorally) party that warranted formation of a mega national alliance against it, he said "they (opposition parties) feel that way, then it should be definitely like that."

Rajinikanth announced his entry to politics last year after the death of former Chief Minister J Jayalalithaa left a political vacuum in the Tamil Nadu.

On the rising incidence of rape and murder of girls in Tamil Nadu, Rajinikanth said tougher laws and stricter implementation was the way out.

Asked about his stand on the release of seven Rajiv Gandhi assassination case convicts, he asked "which seven convicts... I am hearing about it only now."

The Tamil Nadu government had recommended the release of all the seven prisoners to Governor Banwarilal Purohit, who had stated that the matter was under his consideration.

On October 22, a 13-year old Dalit girl Rajalakshmi was beheaded by a 25-year-old man near Salem, which led to public outrage and an outcry, demanding tough action.

Days ago, a tribal girl was allegedly raped by two men in Dharmapuri district. The victim died on Saturday.