Dassault CEO Eric Trappier also said that he has decreased the price of 36 Rafale jets by 9 per cent. 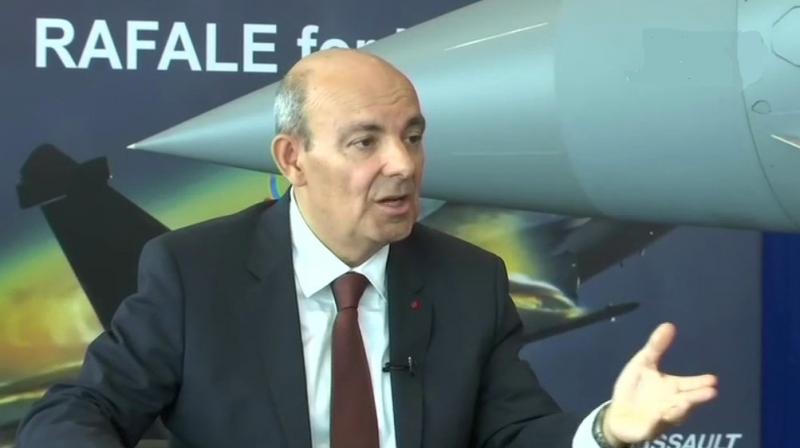 Dassault Aviation Chief Executive Officer Eric Trappier emphasised that the deal was 'clean' and IAF was happy with it. (Photo: Twitter | ANI)

In an interview to news agency ANI, Eric said, "We chose Ambani by ourselves. We already have 30 partners other than Reliance. The IAF is supporting the deal because they need the fighter jets for their own defence to be at the top."

The CEO also rubbished allegations made by Congress president Rahul Gandhi that the former lied about the details of the Dassault-Reliance Joint Venture (JV) for offset contracts in the Rafale Jet deal.

"I don't lie. The truth I declared before and the statements I made are true. I don't have a reputation of lying. In my position as CEO, you don't lie," Trappier said.

Eric also emphasised that the deal was "clean" and IAF was happy with it.

"I know there are some controversies and I know that it is a kind of domestic political fight, with elections it is true in many countries. What is important for me is the truth and the truth is that it is a clean deal and the IAF is happy with this deal," he said.

Responding to Opposition's allegation over the pricing of the fighter jets, Eric said that the present aircraft are cheaper by 9 per cent.

"Price of 36 was exactly the same when you compare with 18 flyaway. 36 is the double of 18, so as far as I was concerned, it should have been double the price. But because it was government to government, there was some negotiation, I had to decrease the price by 9 per cent. The price of Rafale in flyaway condition is less expensive in the 36 contract than the 126 contract," he said.

When asked about the initial agreement with Hindustan Aeronautics Limited (HAL) and the subsequent breakdown of talks with the Indian PSU for production of Rafale jets, the Dassault CEO said that if the initial deal of 126 jets went through they would not have hesitated to work with HAL and Mukesh Ambani-led Reliance.

"It's because the 126 didn't go smooth that the Government of India had to reconfigure to urgently acquire 36 from France. And then I took the decision to continue with Reliance, and HAL even said in the last few days that they were not interested to be part of the offset. So, it has been done by my decision and the decision of Reliance to invest in a new private company," Eric added.

He further said that Dassault Aviation is not putting the money in Reliance. "The money is going into the JV (Dassault-Reliance). Engineers and workers from Dassault are taking the lead as far as the industrial part of the deal is concerned," he said.

"When we created the JV last year, the decision of creating a JV was part of our agreement in 2012, but we waited for the contract to be signed. We are supposed to put in this company together about 800 crores as 50:50. Shares in the JV are 49 per cent for Dassault and 51 per cent for Reliance," the Dassault CEO said.

Eric said that the first delivery of Rafale fighter jets to the IAF is going to take place in September 2019 as per the contract. "It is totally in time," Dassault CEO said.