India   All India  13 Nov 2017  A fair and equitable deal for tribals in their trade
India, All India

A fair and equitable deal for tribals in their trade

It is not a matter of coincidence that left-wing extremism exists in tribal- forest areas. 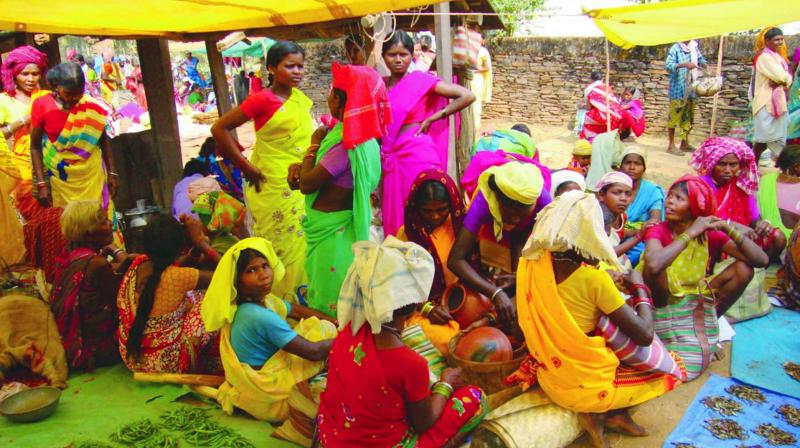 The trade in around 5,000 tribal haats in India is estimated to be worth over Rs 2,00,000 crores a year. A report of the CAG estimated that the tribal receives less than 20% of the value of his produce; the rest passes on to the middleman.

It is Friday. The weekly market day in Lohandiguda, close to the famous Chitrakoot Falls in Bastar. Sonmati has been preparing for this day for a week now. Her husband had felled ripe tamarind pods from a tree in their farmstead. Sonmati had manually removed the shell, the fibre and then decorticated the pod to remove the seeds. What she has now is a basket full of the decorticated tamarind, locally known as phool imli. The produce must be around eight kg. Sonmati understands it as a head-load. She will carry it to the market in Lohandiguda some 10 km away from her village. She will sell it to a person she knows by face. She does not know his name nor that he is the first link in the supply chain. He is an operative of a big merchant in Jagdalpur. Wily ways are his qualification for trade. He will “buy” the tamarind from Sonmati. He will grumble that she has sprinkled it with water to increase its weight. He will under-weigh it on a huge scale. He will deduct one kg for the basket that weighs just 350 grams.

He will deduct another kilogram against sukti-jhukti, the factor of moisture loss and difference in scales. He will fudge the math when computing the amount payable. He knows the illiterate Sonmati cannot understand math. Sonmati will protest, not because she understands the wrong done but because her protest will help her get something more, maybe a packet of cheap biscuits.

That’s a standard profile of the trade in tribal haats (markets). There are an estimated 10 crore tribals in India. Nearly half of them live in forests like Sonmati. Non-timber forest produces and the surplus of agricultural produces is the main source of cash for them. Haats are the markets where they exchange their produce for cash. There is no “eye of the State” here to oversee that the exchange is fair to the tribal. One study done in Bastar estimated that the loss due to improper weighing, unfair deductions and fudged math aggregate to over 55 per cent!

The trade in around 5,000 tribal haats in India is estimated to be worth over Rs 2,00,000 crores a year. A report of the CAG estimated that the tribal receives less than 20 per cent of the value of his produce; the rest passes on to the middleman. The CAG report called for strong government intervention. A parliamentary committee said the same.

If we shy away from such involvement, we fail in our duties towards a segment of our people who need our support most.

One part is a sharp trader and another part is a forest-gatherer who has no scientific idea of pricing, no idea of even weights and measurements. He does not understand arithmetic.

It is not a matter of coincidence that left-wing extremism exists in tribal-forest areas. The State spends huge amounts to fight this. It spends much more on various welfare programmes. If the trade in the tribal haats can be made fair and equitable to the tribal, the State can achieve over four times the amount it invests on welfare programmes.

The government is alive to this need. It has programmes like the minimum support price for minor forest produces (MSP for MFP). However, much more needs to be done to counter the strong forces that have managed to rule the tribal haats by making these markets look insignificant. Trade-centric tribal development is perhaps the route to take to pursue the goal of economic upliftment of the tribals.

Strengthening the haats to be procurement units for the tribals, as this is where he goes to sell his produces, (which after FRA and PESA he rightfully owns) is the core activity. And then, setting up large number of processing units for value addition holds the key to tribal prosperity. Tamarind sells for Rs 25 per kg. Remove the seed it goes up to Rs 125 per kg and mahua sauce out of it sells for Rs 400 per kg.

This benefits of such value addition needs to be shared with the tribal brothers and sisters getting the lion share. The MSP for MFP can do this. All states need to come forward.