The PM had said that while plogging is in use in foreign countries, in India Belvi had promoted it to a great extent. 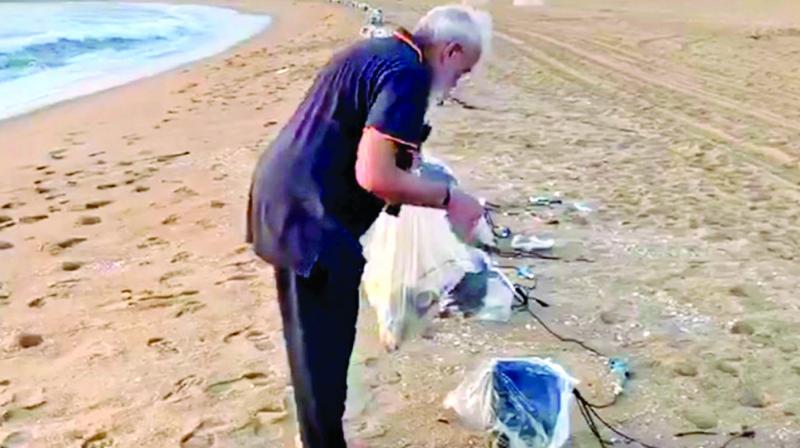 Prime Minister Modi takes a stroll on the beach and also picks litter near the resort in Kovalam on Saturday morning. (Photo: Asian Age)

Chennai: Amidst a hectic schedule with the visiting Chinese President Xi Jinping, Prime Minister Narendra Modi, cleaned the shores of the Kovalam beach during his morning stroll on Saturday, in line with his pet Swachh Bharat project. As the video and his accompanying text urging people to keep their beaches clean went viral, praise for his concern for environment poured out from several people, including the Tamils who have been bombarded these past two days by the social media inundation of the #GoBackModi hate-campaign.

After nearly five-hour long meeting with President Xi on Friday, Modi got up early as usual and apart from his routine of yoga and exercise, decided to take a stroll along the beach just behind his Fishermen’s Cove Hotel. Clad in black T-shirt, the PM walked along the sand, at times stepping into shallow water and sitting for a while on the rocks to admire the sun raising over the waves while rolling his acu-pressure wand between the palms--looking almost like a poet lost in his verse. And then his attention turned to the plastic waste and filth on the beach and without further ado, he started picking up the trash. In no time, the trash of used plastic bags, bottles and other filth filled his hands, so he began filling up a bag he had with him with all that..

“Plogging at a beach in Mamallapuram this morning. It lasted for over 30 minutes. Also handed over my ‘collection’ to Jeyaraj, who is a part of the hotel staff. Let us ensure our public places are clean and tidy! Let us also ensure we remain fit and healthy,” Mr. Modi tweeted along with his beach photos and video.  In another tweet, he said, “Refreshing walk and exercises in Mamallapuram, along the scenic coast.” The three-minute video, showed him collecting the waste as he walked barefoot on the sand.

Needless to say that went viral, drawing admiration from the people who already love the man and from those who have no tags attached and no agenda burdening them. Of course, the Modi-haters had their field day on the social media accusing him of putting up a show. .

Tagging the PM’s video, BJP chief and home minister Amit Shah said: “A true leader leads by example. We are grateful to PM Narendra Modi ji for his untiring efforts towards cleanliness.’ “Let us further his resolve for a Swachh and Samruddha Bharat,” Mr. Shah said in a tweet.

In his Mann ki Baat radio programme last month, PM Modi had hailed the efforts of India’s perhaps first ‘plogger’ Ripudaman Belvi who had launched a campaign to pick up litter while jogging. The PM had said that while plogging is in use in foreign countries, in India Belvi had promoted it to a great extent.

Former Union minister Pon Radhakrishnan too tagged the video and tweeted, “the PM matches words by his deeds,” and urged the people to join hands with Mr Modi in ridding the living spaces of single-use plastics.