India   All India  13 Oct 2018  'Rafale your right,' says Rahul Gandhi as he interacts with HAL employees
India, All India

'Rafale your right,' says Rahul Gandhi as he interacts with HAL employees 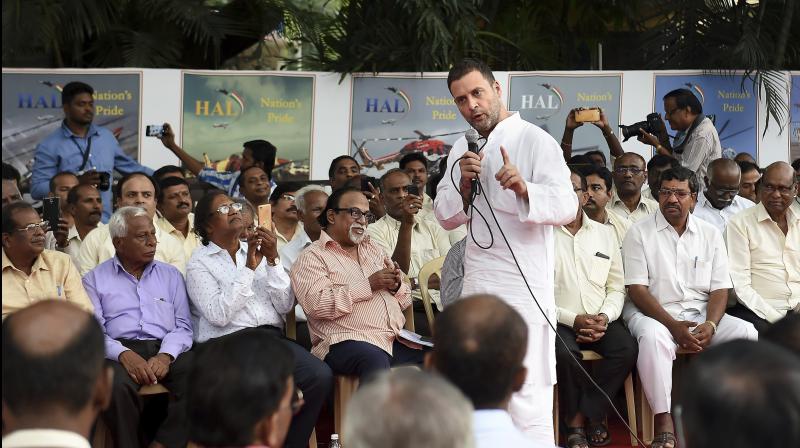 Gandhi, who is 'standing in support' of HAL, will meet and interact with the employees of the public sector unit outside its headquarters in Bengaluru. (Photo: PTI)

Bengaluru: Rahul Gandhi on Saturday met with former and serving employees of the state-run Hindustan Aeronautics Limited or HAL in Bengaluru, amid allegations and counter-allegations over the Rafale fighter jet deal and its offset clause.

Giving a new twist to his high-pitch Rafale campaign, the Congress president alleged that "temples of modern India are being attacked and destroyed; we cannot allow it to be done."

"Rafale is your right; you are a 78-year-old company. You have the experience to build the plane," the Congress president said adding that it was "completely ridiculous" for the government to say that HAL did not have the required experience.

"HAL is not just a company. When India got independence, India built some strategic assets to enter specific areas. HAL is a strategic asset to take India into aerospace," he added.

"The work you've done for this country is tremendous and the country owes you a debt," Rahul said.

"I have come here to listen to you how this strategic asset can be made more effective and the type of difficulties you are facing," the Congress president said.

The Congress on its Twitter handle also shared excerpts from the meeting as well as comments made by former and current HAL employees.The Congress chief earlier said there was a need to "defend the dignity of India's defenders" as he accused the government of "snatching" the Rafale offset contract from HAL.

"HAL is India's strategic asset. The future of India's aerospace industry has been destroyed by snatching #Rafale from HAL & gifting it to Anil Ambani," the Congress president had tweeted ahead of his visit.

"Come defend the dignity of India's defenders. I am in Bengaluru to stand with HAL's employees. Join me outside HAL HQ," he added.

Rahul Gandhi has been attacking the Modi government over the Rs 58,000 crore Rafale fighter jet deal accusing the prime minister of "corruption".