India   All India  13 Oct 2018  A people’s court where a witness swears on snake
India, All India

A people’s court where a witness swears on snake

People from Haryana, Delhi and even Maharashtra come to this village to resolve their disputes. 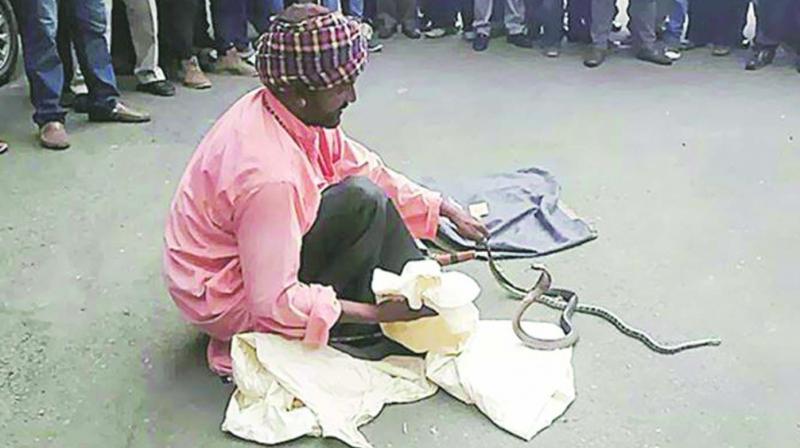 A snake charmer at work.

Lucknow: It is a village where no dispute has ever reached a government court. People believe in a unique community system of justice and insist that it works for them.

The community court is held once a year at Aagandnath village in Uttar Pradesh’s Auraiyya district in July-August. The village is largely inhabited by the Baiga community that is designated as a Scheduled Caste in the state. Baiga community members, a majority of whom are snake charmers, have immense faith in snakes and the verdict in their annual court depends on the snakes to a great extent.

People from Haryana, Delhi and even Maharashtra come to this village to resolve their disputes.

The head of the Baiga community, Longonath, said, “This is our own court and not a single case from here has ever reached the formal government court. We settle cases of rape, theft and even murder and everyone is satisfied with justice that is announced.”

What makes this court unique is the fact that snakes are brought in to serve as witnesses.

“Whenever there is a case, people are asked to swear on snakes that they are telling the truth. When people have lied in some cases, the snakes have bitten them so now no one dares to tell lies,” he stated.

The punishments awarded are in proportion to the crime. “For instance, if someone abuses another, he is asked to seek forgiveness by touching that person’s feet in public. For a serious crime, the punishments are tougher,” said the village head.

The harshest punishment given for rape is to marry the victim if she is ready and to provide financial aid to the victim’s family in case of murder. The leader says that the village is an almost no-crime zone.

Interestingly, this system of justice has existed for years, but the district administration of Auraiyya feigns ignorance about it. “We will find out and let you know,” said a district official.