The I-T Department, during the initial probe, had found unaccounted and misreported wealth linked to Shivakumar. 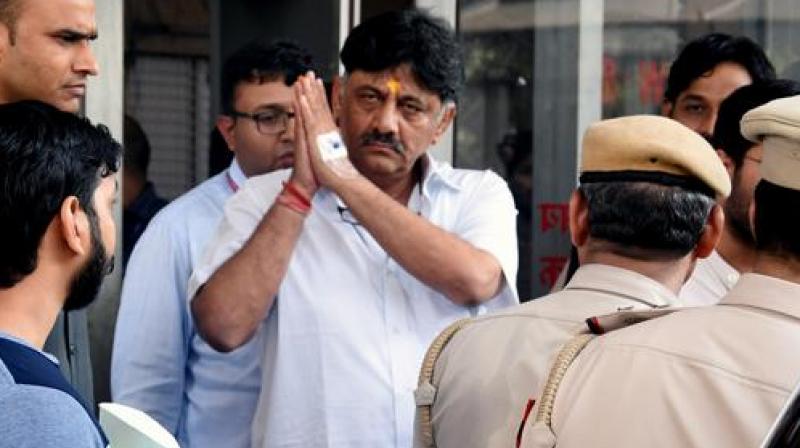 The former Karnataka minister was arrested by the investigating agency on September 3, following which he was sent to ED's custody for 10 days. (Photo: ANI)

New Delhi: The Enforcement Directorate (ED) on Friday sought additional five-day custody of D K Shivakumar in connection with a money laundering case as it needed to confront the Congress leader with latest facts.

Additional solicitor general (ASG) KM Natraj, appearing on behalf of the agency, said that Shivakumar was "evasive" and gave "irrelevant replies" during his custodial interrogation. The ASG also said that the ED wants to "confront Shivakumar with certain people and bank documents."

Shivakumar was presented before a Special court at Rouse Avenue Court Complex here on Friday at the end of the ED remand period. The former Karnataka minister was arrested by the investigating agency on September 3, following which he was sent to ED's custody for 10 days.

The counsel asserted that family members and close associates of Shivakumar have more than 317 bank accounts in over 20 banks. "He did not explain the details of the properties during interrogation," Natraj said.

Following the submissions by the agency, the court asked the probe agency as to how the accused would provide an answer in five days if he has not answered until now.

"What do you mean by non-cooperation? Do you think he will give answers in the next five days? So far, as his answering of questions is concerned, if he was going to do it he would have done it by now," the judge said.

Opposing Shivakumar's custody sought by the ED, Abhishek Manu Singhvi, representing him proposed that his client be kept in a hospital.

Singhvi told the court that Shivakumar health condition is serious and his client suffers from high blood pressure. "He was arrested on September 3. Since then he had been interrogated for 10 hours every day. he has been questioned for over 100 hours despite his frail health" the lawyer said

Shivakumar was brought to the RML hospital in New Delhi yesterday after he complained of being unwell.

A money laundering case was registered by the agency against him in September last year, based on a complaint filed by the Income Tax Department.

The I-T Department, during the initial probe, had found unaccounted and misreported wealth linked to Shivakumar.

The I-T Department also came across money laundering and hawala operations, involving a network of persons across Delhi and Bengaluru. They had allegedly set up a base in order to transport and utilize the unaccounted cash.