During the event, the Sangh will place its perspective on various issues and clear misconceptions about its working and ideology. 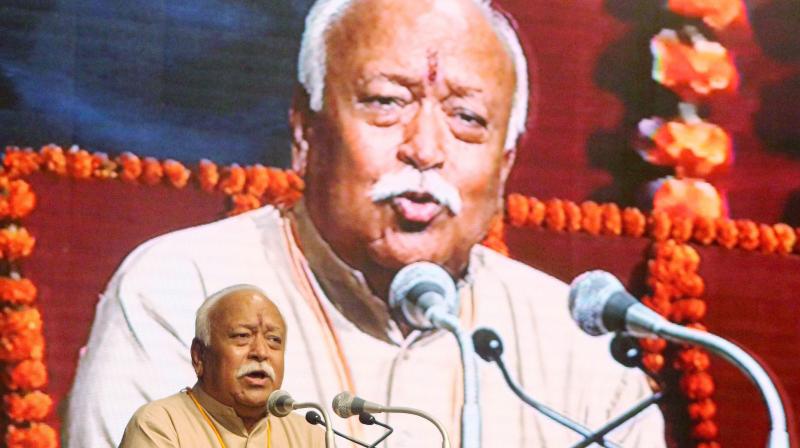 New Delhi: The Rashtriya Swayamsevak Sangh (RSS) has invited nearly 500 people from different fields, including ambassadors of over 60 nations, to its supremo Mohan Bhagwat’s three-day-long lecture series “Future of Bharat: An RSS perspective” from September 17.

While speculation is rife that the RSS will invite key representatives of major political parties, including Congress president Rahul Gandhi and CPI(M) general secretary Sitaram Yechury, sources told this newspaper that the invitations have been sent only to non-political personalities for this first-of-its-kind event. While the RSS had claimed Mr Bhagwat will present the Sangh Parivar’s viewpoint on “various contemporary issues of national importance” during this event, in political circles it is being seen as an attempt by the Sangh Parivar to place it views or clarify allegations levelled against it by the BJP’s opponents, especially with the Lok Sabha polls just around the corner.

Those invited for the event include religious leaders, filmstars, sportspersons, business tycoons, retired judges, former chiefs of the armed forces and ambassadors of over 60 countries. An interactive session will also be held on the third day of the event.

During the event, the Sangh will place its perspective on various issues and clear misconceptions about its working and ideology. Earlier, RSS prachar pramukh Arun Kumar had said the lecture series was being organised in the context of the future of India, and Mr Bhagwat would present the Sangh’s views on various contemporary issues of national importance. Sources said the decision to organise the event was taken at an All-India Prant Pracharak meeting at Somnath in July.

The event is part of the Sangh’s outreach activity that was started by Mr Bhagwat three years ago to meet renowned personalities from different walks of life and share the Sangh’s views with them on major issues.