During the test- firing on Sept. 2, the projectile that was fifth of the series exited the barrel in multiple pieces, and caused accident. 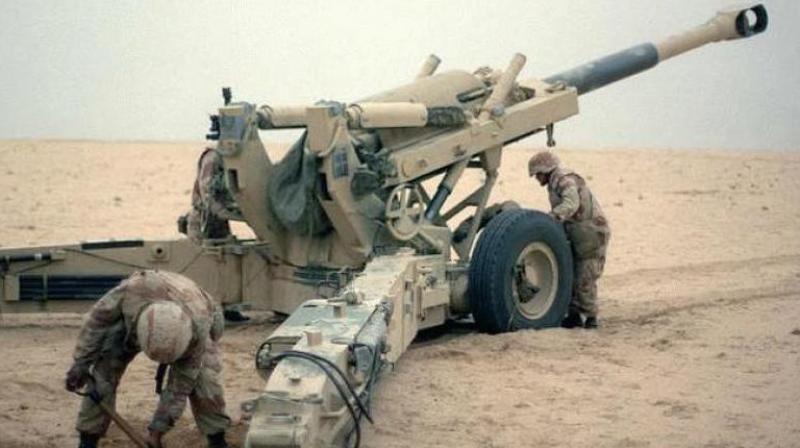 The tests of the 155 mm guns at the site of India’s nuclear tests were being conducted to collate and determine critical data like trajectory, speed and frequency of fire. (Photo: AFP/ Representational Image)

New Delhi: Defective ammunition damaged the 5-metre-long barrel of one of the two pieces of brand new M-777 A-2 howitzers currently being test-fired in Rajasthan’s Pokhran desert, once again raising the issue of the quality of ammunition churned out by the state-run ordnance factories.

As per Army sources, the incident took place on September 2. “The US-manufactured gun was firing Indian ammunition. During the firing, the projectile which was fifth of the series, exited the barrel in multiple pieces, thus causing the accident,” the sources said.

“The barrel of the gun has been damaged, extent of which is being assessed by a joint investigation team, which is on the site,” they said, adding that no one was injured in the incident.

Under standard conditions, the state-of-the-art howitzer is compatible with all standard 155 mm ammo types.

Interestingly, the CAG in a latest report had pointed out that about `49 crore worth of 155 mm ammo had been rejected by the Indian Army during 2015-17 due to ‘faults’. The national auditor pointed out partial detonation, higher deviation, rusting shells, improper phosphating, wrong weight and length as reasons.

The tests of the 155 mm guns at the site of India’s nuclear tests were being conducted to collate and determine critical data like trajectory, speed and frequency of fire.

The two BAE systems-manufactured guns are the first of a consignment of 25 guns, which are being bought from the US in a flyaway condition, while another 120 are to be made by BAE Systems in India in partnership with Mahindra Defence.

Working out to about `35 crore a piece, India is buying 145 such guns in a government-to-government deal with the US at a total cost of nearly Rs 5,100 crore. Besides India, the M-777 gun is used by the US, Australia and Canada.

While three more M-777s are meant to be supplied to the Indian Army in September 2018, induction is expected to commence from March 2019 onwards with five guns per month till the complete consignment is received by mid-2021. The September-2 accident will pose a snag to Indian plans to fasttrack the deployment of the 155 mm howitzers in the backdrop of a rapidly evolving changing security situation in its neighbourhood.

Highly portable and capable of being transported by helicopters to the place of deployment in remote and very high-altitude areas, at 4,200 kg, the M-777 is being viewed as a potent weapon in the Himalayan terrain facing China and Pakistan.