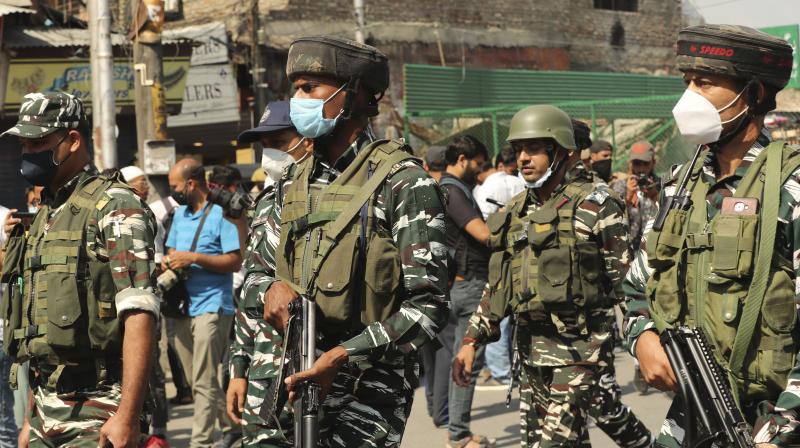 Indian paramilitary soldiers keep guard near the site of a grenade attack at a busy market in Srinagar, Tuesday, Aug. 10, 2021. (AP/Mukhtar Khan)

Srinagar: Jammu and Kashmir’s frontier town of Rajouri is tense after a mysterious blast, possibly a grenade attack, at the house of a local BJP leader killed his minor nephew and injured him and six other family members. A protest strike is being observed in the town, 147-km northwest of winter capital Jammu.

Meanwhile, one suspected militant was killed and two security personnel and as many civilians were injured in a gunfight in Kashmir Valley’s southern Kulgam district. The fighting had erupted on Thursday afternoon after two militants made an abortive attempt to target a convoy of Border Security Force (BSF) while it was plying on vital Srinagar- Jammu highway and ended on Friday morning, officials said.

The police sources said that a powerful explosion took place at the residence of BJP Mandal president Jasbir Singh, an ex-serviceman, at Khandil Bridge Chowk in the heart of Rajouri town, killing his four-year-old nephew and injuring him and five others, two of them critically.

The sources said that it could be a grenade attack by separatist militants but added that the investigations were underway, and the police was with the help of forensic experts trying to ascertain the nature of the blast.

The incident comes close on the heels of the militants killing a Ghulam Rasool Dar, district president of BJP Kisan Morcha (Kulgam) and a sarpanch, and his wife Jawahira Banoo in Anantnag town and just a day after a 28-year-old man Ankush Kumar Sharma was stabbed to death by unknown assailants in Chakli village of Rajouri district.

The boy killed in the Rajouri blast has been identified as Veer Singh son of Balbir Singh and nephew of the BJP leader who was along with his family targeted at around 9.25 pm on Thursday, the sources said. The locals said that the blast occurred when Jasbir Singh, 36, and his brother Balbir Singh and their families were sitting in the gallery of the house. The injured were immediately rushed to the hospital where Veer Singh succumbed to the injuries.

Besides the siblings-Jasbir and Balbir, their parents Romesh Chander, 65 and Sia Devi, 60, Karam Singh and Arjun Singh- both 12-years-old- were injured, the police and hospital sources said. Two seriously injured persons have been taken to Jammu’s Government Medical College (GMC) Hospital for specialised treatment.

Soon after the incident, the residents held protests over the authorities “not providing security to the BJP leader and his family and poor medical facilities available in the town”. A protest shutdown is being observed in the town and its peripheries in response On Friday in response to a call issued Sanatan Dharam Sabha and some other local Hindu organizations.

BJP general secretary, In-charge J&K, Tarun Chugh, while condemning the incident alleged that it was a “cowardly attack by Pakistan-based terrorists on BJP leader and his family.” BJP’s J&K unit president Ravinder Raina said “We strongly condemn the attack and urge the police authorities to immediately take measures for arresting the terrorists responsible for it and bringing them to justice.”

Meanwhile, the gunfight that had broken out in Malpora, Mir Bazar area of Kulgam on Thursday afternoon ended early Friday, leaving one suspected militant killed and one Army and one CRPF jawan and two civilians injured.

The encounter had started after militants targeted a convoy of the BSF along the Srinagar-Jammu Highway near Malpora, Mir Bazar at around 3 pm on Thursday.

“Reinforcement of the J&K Police and Army reached the area immediately and cordoned it off. Besides, the joint party ensured not to give any chance to terrorists to escape from the spot and they managed to take shelter in a nearby huge building,” a police statement said. It added, “Due to indiscriminate firing by terrorists holed up in the building, one CRPF and one Army personnel and two civilians received gunshot injuries and were immediately evacuated to hospital.”

The police said that on Friday morning, the corpse of a militant was found lying at the encounter site. Inspector General of Police (Kashmir range), Vijay Kumar, said that the slain militant has been identified as Usman, a “dreaded foreign terrorist” whereas his accomplice may have managed to flee from the area.

“The terrorists were planning a big strike on the security forces ahead of Independence Day. One AK-47 rifle with four magazines, a few grenades and one RPG launcher were recovered from the encounter site,” he said. He added that the security forces had earlier received an input about the possible terror attack along the highway and that it was “due to the alertness of the security forces” that the terror plan was frustrated.