T Raja Singh Lodh alleged that his party was not providing any support for 'gau raksha' (cow protection). 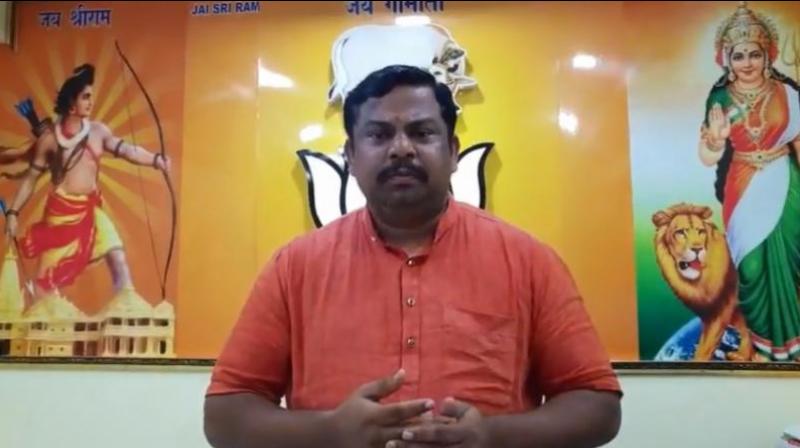 '...I and my team of 'gau rakshaks' will hit the streets and stop slaughter of cows in the state,' T Raja Singh Lodh said. (Photo: Screengrab | Facebook | @RajaSinghOffical)

Hyderabad: Telangana BJP lawmaker T Raja Singh Lodh on tendered his resignation on Sunday night so that he can "act" against cow slaughter during Eid al-Adha without embarrassing the party.

T Raja Singh Lodh, who represents Goshamahal constituency in the assembly,  alleged that his party was not providing any support for 'gau raksha' (cow protection).

In a video message posted on a social networking site he said that he has forwarded his resignation letter to Telangana BJP president K Laxman.

"For me Hindu dharma and cow protection are priorities, and politics comes later. For 'gau raksha', I have resigned from the BJP. I brought up the issue in the Assembly many times, but the party did not provide any support," he said.

"...I and my team of 'gau rakshaks' will hit the streets and stop slaughter of cows in the state," he added.

In the video message T Raja Singh Lodh said he and his team is ready to kill or die to stop cow slaughter during Eid al-Adha in Telangana.

He claimed that about 3,000 cows are going to be slaughtered for Bakr Id or Eid al-Adha next week.

He also attacked Telangana Chief Minister K Chandrasekhar Rao and said he is aware of cow slaughter but is not acting upon it.

T Raja Singh Lodh, who has been booked several times by police for his controversial statements and speeches, said, "For cow protection...we will kill or we will die. Our aim is to see that cows are not slaughtered."

T Raja Singh Lodh said he did not want to put the Bharatiya Janata Party (BJP) in any trouble, so decided to resign from it.