Environment cell to be formed; protection for eco-sensitive zones. 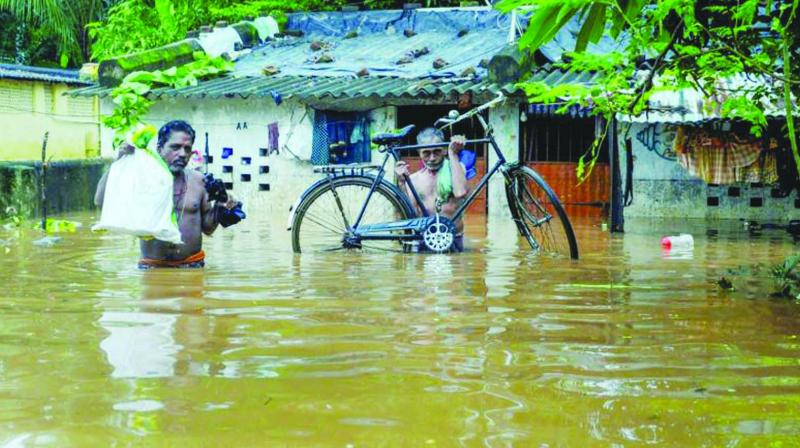 Villagers wade through flood waters at Bhoisahi in Bhubaneswar.

Bhubaneswar: After experiencing two spells of deluge during the rainy season, country’s Number 1 Smart City and Odisha capital Bhubaneswar has woken up to adopt sustainable practices in construction and land development.

The BJD government headed by Naveen Patnaik, believes the sustainable practices would at least help it address the water-logging problem which the Opposition parties have made a political issue ahead of the 2019 Assembly and Lok Sabha polls.

Bhubaneswar has three Assembly constituencies —Jayadev, Bhubaneswar North and Bhubaneswar Central.  The BJP and Congress, two key Opposition forces in the state, have been critical of the administration for the water-logging in these constituencies. They portray it as a colossal failure of a “vision-less” government.

To escape the Opposition’s vitriolic attack, the government has planned to establish an Environmental Cell (EV) that would take care of the environmentally sensitive zones in the city. In fact, the BJD government had received serious drubbings from different quarters after the city was devastated by rainwater.

To further reinforce the sustainable approach of city planning, the government has started introducing provisions on Water Sensitive Urban Design (WSUD). It has floated advertisements to recruit professionals for establishing an environmental cell.

“It will be a multidisciplinary cell with experts from different fields and they will work as a team towards the environmental improvement of the city. As per the advertisement, the cell will have three planners, one expert on water conservation and management and one urban design expert,” says Bhubaneswar mayor and senior BJD leader Ananta Narayan Jena.

If all goes as planned, the cell will be headed by a senior administrative officer.

“This cell will function under the administrative head. The authority’s focus on environmental issues may turn Bhubaneswar into a more sustainable place and bring cheers to environment lovers,” adds the mayor. The formation of the cell is necessitated with large-scale problems encountered recently by water-logging and urban flooding across the city and within the BDA jurisdiction due to unwanted urban growth in ESZs. “The proposed move would enable BDA to have proper planning and future methodology on how to contain the situation so that urban flooding would be managed,” says noted environmentalist Dr P.K. Jena. As per the Water Sensitive Urban Design in the BDA (Planning and Building Standards) Regulations, 2018, the proposed cell would work and ensure sustainable planning across all the ESZs.

The city planners learnt a lesson when a posh Nayapali area, which accommodates state’s 80 per cent VIPs and VVIPs, got completely inundated in July.  “With the new cell, the city would heave a sigh of relief as during the rainy months, the ESZs would be equipped to let stormwater canalise through the natural water bodies and also help in recharging ground water. The team will also work on creating beautiful water bodies for recreation facilities,” said the Smart City’s mayor. In July and the first week of August, Bhubaneswar was devastated by stormwater. The situation turned so worse that National Disaster Rapid Action Force and Odisha Disaster Rapid Action Force personnel, who normally carry out rescue and relief operations during high river floods and natural calamities, were deployed to evacuate marooned people.

The Opposition blamed the Naveen Patnaik government’s apathy in preventing unauthorised construction in the basic areas of the 10 natural streams that crisscross the city serving as natural drains and choking the streams.