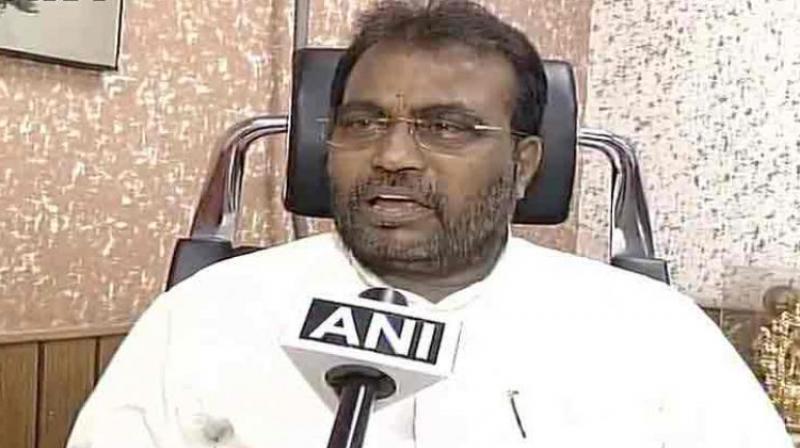 Although Shyam Rajak has denied his links with Manisha Dayal and her shelter home, the opposition parties claimed that several ruling party leaders have been involved in saving people associated with shelter home incidents. (Photo: ANI)

Patna: A week after social welfare minister Manju Verma resigned over Muzaffarpur shelter home issue another senior JD(U) leader Shyam Rajak’s closeness with one of the accused in Patna shelter home case has kicked up a political storm in Bihar.

His photograph with Manisha Dayal, the secretary of the shelter home at Patna, was found circulating on social media platform on Monday. Manisha along with one of her associate Chitranjan Kumar was arrested on Sunday for neglecting medical treatment of two inmates who had died on Saturday in Patna.

Although Shyam Rajak has denied his links with Manisha Dayal and her shelter home, the opposition parties claimed that several ruling party leaders have been involved in saving people associated with shelter home incidents.

According to HAM Spokesperson Danish Rizwan, “Pieces of evidence against leaders associated with ruling alliance are emerging every day but Chief Minister Nitish Kumar is not taking any action against them. Manju Verma resigned because of political pressure. Nitish Kumar should also take responsibility of shelter home incidents".

Shyam Rajak while refuting allegations against him said that the photograph in question was taken during a cricket tournament which he had attended as a guest. “I have no clue about the shelter home she was running. Being a political leader I was invited to attend a cricket match during which the photograph was taken”, he said.

HAM Chief Jitan Ram Manjhi and RJD leader Tejaswi Yadav have been demanding Chief Minister Nitish Kumar's resignation over the Muzaffarpur issue on "moral grounds".  The opposition party leaders had earlier also hinted at using the shelter home incident as an agenda against Nitish Kumar and his government during 2019 general elections.

Two shelter home inmates Poonam Bharti (16) and Babli (40) had died on Saturday under mysterious circumstances but their deaths were made public on Sunday after police got the information.

The shelter home authorities during questioning had informed the police that the two inmates were taken to hospital following complaints of diarrhea and fever. A medical board has also been constituted to find cause of death, the police said.

“We have been informed by the shelter home that inmates died during treatment at the hospital but the hospital authorities claim that they were brought dead. We got the information about their death only on Sunday”, the police said.

A survey carried out by Mumbai based Tata Institute of Social Sciences (TISS), which uncovered the Muzaffarpur shelter home incident had also exposed the vulnerability of residents at 15 other shelter homes in Bihar.

The CBI is currently probing the Muzaffarpur shelter home case where 34 inmates were subjected to extreme brutality and raped by officials and employees of the facility.