BJP is aiming for 73 plus UP seats, says Amit Shah

Amit Shah also lashed out at the Opposition and said that “intruders” would not be allowed to stay in the country. 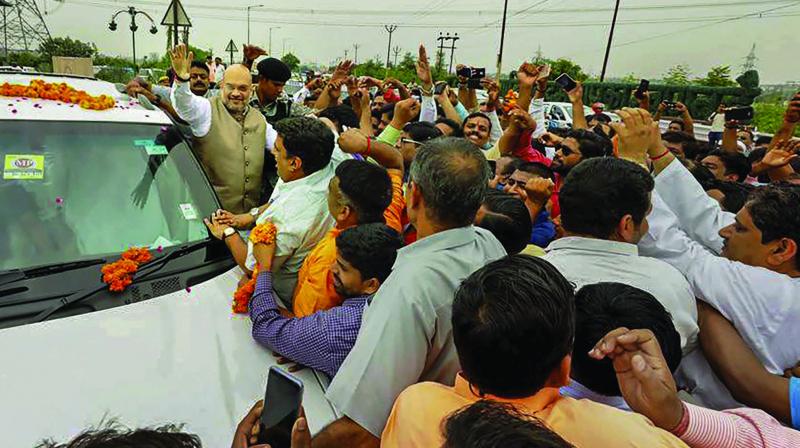 BJP president Amit Shah is greeted by party workers at Rajnagar Extension in Ghaziabad on Sunday while he was on his way to Meerut to attend the BJP’s state working committee meeting. (Photo: PTI)

Lucknow/Meerut: The BJP plans to go to the polls in Uttar Pradesh, and possibly across the country, with the slogan “Phir Ek Baar, Modi Sarkar”. The party has set a target of 73-plus seats for the 2019 Lok Sabha elections in UP, and BJP president Amit Shah has asked party workers to ensure 51 per cent votes for the party from all sections of voters.

Mr Shah, who addressed the party state executive session in Meerut on Sunday, asked workers to take the achievements of the Narendra Modi and Yogi Adityanath governments to the people. He lauded the work done by the Yogi government in the state. The media was not allowed access to this session.

Mr Shah also lashed out at the Opposition and said that “intruders” would not be allowed to stay in the country. “We will not allow illegal Bangladeshi ‘intruders’ to stay in the country even though we will make efforts to ensure that refugees who come seeking shelter are given citizenship,” the BJP chief is learnt to have told party workers.

Referring to Congress president Rahul Gandhi and Samajwadi Party chief Akhilesh Yadav, Mr Shah is understood to have said that in 2017 “two boys (ladke) joined hands”, but the BJP won over 300 seats in the Assembly. This time, he is learnt to have added, if all three — SP, BSP and Congress — joined hands,  “we will win at least 74 (Lok Sabha) seats”. In 2014, the BJP had won 73 of the state’s 80 Lok Sabha seats.

Briefing reporters, party general secretary Vijay Bahadur Pathak said the BJP will launch a series of statewide rallies from October 2 to mark the 150th birth anniversary of Mahatma Gandhi. Through these rallies, the party hopes to demonstrate its “achievements” at the Centre and in the state in order to attract voters.

He said the party will hold a variety of programme from August 15 to September 30 at the booth level to connect with voters and open a fresh membership drive.

The BJP top brass has asked party leaders to restructure its booth-level committees in all the 1.60 lakh booths in the state. The booth-level committees will comprise 50 workers, including 10 members each from the Scheduled Caste and OBC communities. The party leadership has also sought a list of 100 names of volunteers and party supporters from each district, who would be included in election-related activities. The BJP cadre has also been asked to review the voters’ lists in their respective areas to ensure that new voters are also included in the list.

The BJP will also seek a Election Commission directive to enroll new voters in the voting list. “A new toll-free number — 18002661001 — has also been launched to register the new members”, he said.

There are over 1.60 lakh polling booths in UP and the BJP is the only party which has committees in all of them. The BJP leader said that the party will celebrate Independence Day as “Bharat Parva” with a four-day programme.

“On August 15, all booth committees will hold a massive plantation drive, with each booth given a target to plant at least 11 saplings. On August 16, the Kisan Morcha will hold programmes across the state to honour the families of freedom fighters and martyrs, while on August 17 BJP Yuva Morcha activists will bring out ‘Prabhat Pheris’ in the state. On August 18, the Mahila Morcha will organise patriotic programmes, including kavi sammelans”, he said.