Ministers Rajnath Singh, Harsh Vardhan, Prahlad Joshi and other dignitaries were present for the occasion. 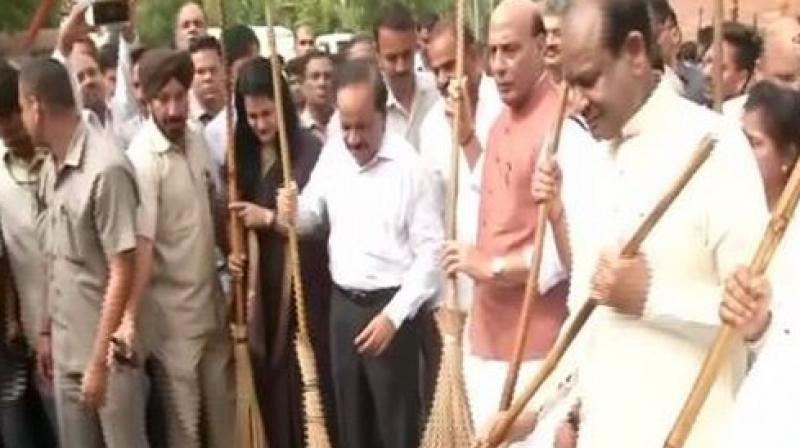 Recalling that the Swachhata Abhiyan was launched earlier by Prime Minister Narendra Modi to coincide with the 150th birth anniversary of Gandhiji. (Photo: ANI)

New Delhi: Launching a two-day long special cleanliness drive in the Parliament House Estate on Saturday, Lok Sabha Speaker Om Birla urged the MPs to work towards taking the zeal of Swachhata Abhiyan to each village of the country.

Addressing the dignitaries, Birla said the commencement of the Swachhata Abhiyan in the Parliament House Estate is an endeavour to spread the message of 'Swachhata' envisioned by Mahatma Gandhi.

Recalling that the Swachhata Abhiyan was launched earlier by Prime Minister Narendra Modi to coincide with the 150th birth anniversary of Gandhiji, Birla said the Members of Parliament are the representatives of 130 crore people of India in Parliament -- the temple of democracy and have an important role to spread this awareness.

Earlier, Defence Minister Singh said this is the first time that such a Swachhata Abhiyan has been initiated in the Parliament House and congratulated Speaker Birla for this initiative.

Singh further said that the Swachhata Abhiyan has now become a movement and people across the country have now become more aware of the importance of the cleanliness in their surroundings.

Speaker Birla, Union Ministers, MPs, and other dignitaries also paid floral tributes at the statue of Mahatma Gandhi and also took a pledge to spread the message of Swachhata.